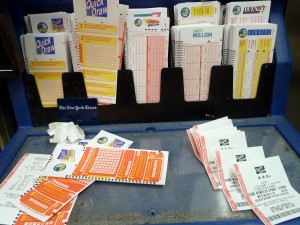 Our latest podcast is called “Lottery Loopholes and Deadly Doctors.” (Download/subscribe at iTunes, get the RSS feed, listen via the media player above, or read the transcript here.)  This is the final episode of five one-hour Freakonomics Radio specials that have been airing on public radio stations across the country. (Check here to find your local station.)

These hour-long programs are “mashupdates” — that is, mashups of earlier podcasts which we’ve also updated with new interviews, etc.

In two weeks, we’ll start releasing a series of brand new podcasts. Among the topics to listen for: the selling of souls, the value of college, and the strategic use of jerkitude (that is, acting like a jerk).

So what will you hear in “Lottery Loopholes and Deadly Doctors”? Here’s a summary:

Americans have a famously low savings rate: a Harvard survey found that half of us, if faced with an emergency, couldn’t come up with $2,000 in 30 days. Most people would rather spend than save — and one of our favorite expenditures is playing the lottery. In a given year, we spend about $58 billion on lottery tickets, or roughly $200 per person. As entertainment goes, the lottery is pretty cheap – a dollar and a dream, and all that. But as an investment, it offers a dreadful return, which is why the lottery is sometimes called “a tax on stupid people.”

This episode looks at a little-known financial initiative that might help people save money while giving them the thrill of the lottery. It’s called a Prize-Linked Savings (PLS) account, and it pools a sliver of the interest from all depositors and pays out cash lottery prizes. If you don’t win, you still have your savings – thus, a “no-lose lottery.” In places like the U.K. and South Africa, millions of people have been coaxed into saving money via a PLS plan. But state and federal officials in the U.S. aren’t very interested. Why? Here’s a hint: guess who runs (and profits from) the lotteries in our country? The answer: state governments, who are trying to expand their reach at this very moment.

Also in this episode, we take a broader look at financial literacy – or, really, financial illiteracy. In general, Americans aren’t very good at the basics of saving, investing, and retirement planning. So we want to know: How do we improve our grade?  We’ll hear from one scholar who wants to put financial literacy in schools and another who thinks that would be a waste of time. Guests also include two members of President Obama’s economic team and National Book Award-winner Sherwin Nuland.

And if education isn’t the route to financial literacy, maybe we can learn something from how one Los Angeles hospital solved the problem of its doctors failing to wash their hands.

There’s much more to read and hear via the posts on the original podcasts: “Is America Ready for a “No-Lose Lottery”?,” “The “No-Lose Lottery,” Part 2,” and “What Do Hand-Washing and Financial Illiteracy Have in Common?“

What's that soul/funk instrumental music used right before the following?

"DUBNER: I know what you’re thinking. You’re thinking: wow, this PLS idea sounds great! An interesting, fiscally responsible, even fun way to encourage people to save more money. So what’s stopping it from going big-time""

Sounds like "The Meters" to me. Not sure what song though...

This is the second time that I've listened to this feature and I just had to comment.

Financial literacy and Financial education are not the same. Ana Maria is talking about the basics that everyone needs to know. Lauren is wrong and over-simplifying a serious problem. We don't need to know how to be our own doctor but we do need to know first aid. We don't need to be our own mechanic but we should know how to change a tire. Most people don't need to know how to make stock and bond purchase decisions but they need to know how interest on credit cards and interest on bank accounts work. I have a friend who is currently spending thousands of dollars on Financial Education, learning how the markets work and how to make money on them, she's eventually going to get into day-trading. That's not something that I'm not interested in but Financial literacy, that's the only way that I have been able to survive the last few years of the economy going into the crapper.

Exactly right. We all need a basic level of undestanding so we know how to deal with everyday issues, when to call in outside help, and how to evaluate the advice we receive. The alternative is a group of people who don't understand the basics and are completely dependent on others.

I really like the car-driving analogy for financial education. Unfortunately, what Anna Maria doesn't understand is that most people are NOT PROFICIENT at driving.

Also what people seem to forget is that much of the complexity of financial markets is because of regulation, not in spite of it. Its entirely possible that no regulation at all would be much better than the abysmal regulation we have now.

I listened with great interest to the latest episode.

It's funny how these things work. Not 1 month ago, my mother pulled me and my brother aside at a family gathering and said she had some papers for us. Turns out, we've had £20 each in 0 interest English PLS accounts since we were toddlers. Having long since turned the age of majority (uh, about 15 years ago) she wrote to the savings union and had the accounts transferred to us. The £20 has not grown. In fact, accounting for inflation it's lost a lot of its value. Money will do that over the span of 30 years when it's not accruing interest.

Neither my brother nor I understood the concept. "So, it's a savings account? What's it worth now?" Half an hour later, we finally understood. It's worth exactly the same amount as the day it was opened... But there are prizes!

Mum has a £50 account. Apparently, PLS accounts were all the rage in England in the very early 80s.

Sadly (predictably, if you want to get all mathematic about it) none of us have won.

And the frequent articles on this blog about "how to get children to save..." are wildly off-base and counterproductive. Better that we should promote "how children need to invest in their own futures...and to hell with saving".

--"Remember: I only regret my economies.” --Reynolds Price

Also what people seem to forget is that much of the complexity of financial markets is because of regulation, not in spite of it. Its entirely possible that no regulation at all would be much better than the abysmal regulation we have now.

Hi Jose -- Do you live in the states? Perhaps you're aware of a 2008 crash due to unregulated financiers having a laugh at the unregulated mortgage & derivatives market. If not, the tax payers lost more money in those unregulated markets then anyone could have possibly gained otherwise. Woohoo, go team red! Wait.

I was interested in a piece of music too: That whistling tune.

Good podcast too. It makes me cussing mad that banks and governments find it so easy to squash everything....That savings account sounded very motivating. They don't you to save some for your children later. Nope. They want to spend your children's money now. That's a slow motion train wreck.

How did Freakonomics forget to talk about the macro effects of increasing the savings rate? The savings rate went negative in 2006. Did this have anything to do with the increase in home prices at that time? In a show informed by economics one might think these are important and interesting questions. Did economic planners in the United States help warn people about the bubble in house prices?

It is almost impressive how you could forget to even mention some of these questions?

Here's a crazy question: would states have to resort to lotteries to raise revenue if the Fed. Government took advantage of interests rates on its long term bonds, and invested the funds in state run institutions?

One angle that was entirely missed was the Swedish PLS structure - which is run BY THE GOVERNMENT. It encourages saving, offers a lottery four times per year and the money is able to go into social structures - and not the pockets of big banks.

I cannot speak for big lottery plays, but scratch tickets are rigged. Here's the scenario. There are (4) 200k jackpots, but by the end of the scheduled play time there's only 1 jackpot winner. That means all they had to do was not ship out the other 3 winners.
Look into this if you want. Scratch tickets are scams disguised as fair odd fun.
This was a nice look into the core of how people think, can't wait for the next one.

After Castro took power in Cuba, he wanted to eliminate the national lottery because he viewed gambling as a scourge, but the people really like the lottery so they kept it and made a change -- which I think all the lotteries here in the USA should adopt -- accumulated losing lottery tickets could be exchanged for savings bonds of the same face value paying out a decade ahead.

Ever heard of "Bonus Bonds"? Does exactly what you describe, gives you a small chance of a big win for every dollar invested:
http://www.bonusbonds.co.nz/

I'm a little confused about this PLS stuff, isn't it just a premium bond? They're hardly a new idea, we've had them in the UK since 1956.