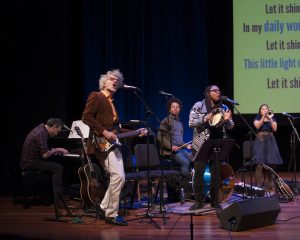 Throughout history, women composers stood in the shadows of their male counterparts. Women were not allowed to hold music positions, one of the support systems for male composers. They were expected to have a family and get married. Some young women were fortunate enough, if they lived in upper-class families, to receive lessons growing up.

But some “hidden” women composers influenced the famous men we know of today. Mozart’s older sister, Nannerl, and Mendelssohn’s sister, Fanny, were both talented musicians who were discouraged from pursuing musical careers. And in the U.S., Ruth Crawford Seeger’s classical compositions were overlooked for years, until 1986 when Matilda Guame wrote an extensive biography about her.

It’s time for Tell Me Something I Don’t Know to face the music, including bridges, healers, lumberjacks and, of course, women. Our panelists are:

David Hajdu, music critic and writer, who has suffered an occupational hazard.

Faith Salie, comedian/journalist and writer, who has a 2-1 record as a wedding singer.

Our real-time fact-checker is Dan Zanes, accompanied by his live band.