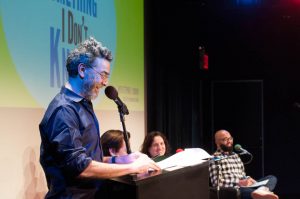 Let’s start at the beginning: Genesis. God creates Adam and Eve and places them in the Garden of Eden with one caveat: no eating from the Tree of the Knowledge of Good and Evil. We all know they eat the apple and all hell breaks loose, but was it really an apple?

The short answer is that the fruit is not named. In fact, it is almost certainly not an apple, since apples are not native to the ancient Near East. The idea that it was an apple came from the fact that the Old Testament was written, in Hebrew, translated into Greek and then into Latin, and for 1,500 years you could only read the Bible in Latin. In Latin, the Hebrew word for “evil” is malus, and the Latin word for “apple” is malum. So what did they eat?

We look into unholy fruit, religion in banking and the politics of reincarnation. Our panelists are:

John Fugelsang, comedian, actor and host of SiriusXM’s Tell Me Everything, who holds the record for deepest conversation — beneath the Bermuda Triangle.

Aman Ali, comedian, producer and storyteller, who lost a wrestling match in high school because of his religion.

Our real-time fact-checker is A.J. Jacobs, host of Twice Removed, who stoned an adulterer in Central Park — with permission.