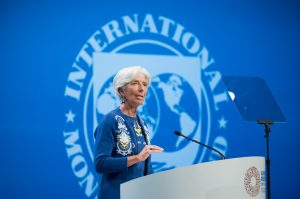 Christine Lagarde became head of the I.M.F. in 2011; she’ll step down to lead the European Central Bank later this year. She has emphasized climate change, inequality, and helping those hurt by free trade. (Ryan Rayburn/IMF Photo)

The International Monetary Fund has long been the “lender of last resort” for economies in crisis. Christine Lagarde, who has led the institution since 2011 and will step down to head the European Central Bank later this year, has tried to prevent those crises from ever happening.

To find out more, check out the podcasts from which this hour was drawn: “Not Your Grandmother’s I.M.F.” and “Why Uber Is an Economist’s Dream.”