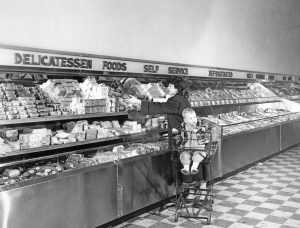 Aisle upon aisle of fresh produce, cheap meat, and sugary cereal — a delicious embodiment of free-market capitalism, right? Not quite. The supermarket was in fact the endpoint of the U.S. government’s battle for agricultural abundance against the U.S.S.R. Our farm policies were built to dominate, not necessarily to nourish — and we are still living with the consequences.

Plus: Sylvia Acevedo was raised in a poor, immigrant family. Growing up, she was told that “girls like her” didn’t go to college. But she did, and then became a rocket scientist and tech executive. Now she’s C.E.O. of the very organization she credits with shaping her life — the Girl Scouts of the U.S.A.

To find out more, check out the podcasts from which this hour was drawn: “How the Supermarket Helped America Win the Cold War” and “What Do Nancy Pelosi, Taylor Swift, and Serena Williams Have in Common?”