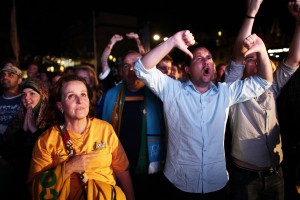 We have just released a series of five one-hour Freakonomics Radio specials to public-radio stations across the country (check here to find your local station), and now they’re hitting our podcast stream as well. If you are a dedicated podcast subscriber, then some of this material will be familiar to you. These new shows are what might best be called “mashupdates” — that is, mashups of earlier podcasts that have also been updated with new interviews, etc.

Today’s episode is called “Show and Yell” (download/subscribe at iTunes, get the RSS feed, listen via the media player above, or read the transcript). It draws from our earlier podcasts “Hey, Baby, Is That a Prius You’re Driving?” and “Boo … Who?”

In a nutshell, here are the questions we seek to answer in today’s program:

Is booing an act of verbal vandalism or the last true expression of democracy? And: when you drive a Prius, are you guilty of “conspicuous conservation”?

You’ll hear how Philadelphia sports fans earned their reputation as the loudest boo-birds, and whether the distinction of high or low culture plays a role. You’ll hear from former Pennsylvania Governor Ed Rendell, who admits to booing Santa Claus; and sportswriter/opera buff Robert Lipsyte, who was surprised that more people didn’t boo Pavarotti when he “parked and barked” his way through a performance.

And we look at “conspicuous conservation” – when people go out of their way to engage in “green” activities. While driving a Toyota Prius may do a little bit of good for the planet, being seen driving a Prius may do a lot of good for you. And one more mystery: why some people install solar panels on the shady side of the street.

A friend of mine who WALKS to work every day was actually stopped by a complete stranger & Prius owner on the street. This person bragged that they were doing so much for the environment by owning a Prius and then asked "so what have YOU done for the environment today?" I consider myself decently morally aware / a good (enough) environmentalist, but hearing that story made me want to start a tire fire. I can't believe people feel they need validation from strangers that badly, but apparently they do.

Minor quibble. When the Prius launched, it looked just like the Toyota Echo (the design was from Toyota's California design studio), and had the 4-door sedan look from 1997-2003. It was in 2003 that it was redesigned in Japan as the 4-door liftback that we know today... So it wasn't originally designed to be as distinctive as described in the podcast. Ironically the Honda Insight (2nd hybrid in the world, first in the US), *WAS* distinctive from anything else that Honda sold. However as a two-door coupe, it wasn't as practical and Honda eventually redesigned it (which it now looks a lot like a Prius, not a Civic, even though there is also a Civic Hybrid).

The Insight design was actually largely based off of the CRX from the late 80's and early 90's. It had the same 2 seat, 2 door liftback design. Calling it a "coupe" isn't really accurate, because it didn't have a traditional "trunk."

The Insight also had the least aerodynamic drag of any production car made to date, but its styling (the wheel well covers, for example) along with the impracticality and price hurt its acceptability.

the prius study seems based on the presumption that if someone chooses the prius over the honda, it's automatically because they are engaging in conspicuous conservation. maybe the prius just looks cooler, or is better designed in other ways. i'm sure that there is a lot of truth to the theory of conspicuous conservation as a form of activism and/or taking the moral high ground. however, i don't think that this study proves it, because its conclusions are drawn based on correlation and not causation. now i've got that off my chest, i'm off to do some recycling.

Did you consider that many people who spend money on green technology are just "early adopters" seeking to create a demand and incentive for markets to continue investing in such technology until they are more efficient? I and others I have spoke to think just that. Furthermore, now that gas is is approaching $4 a gallon, purchasing a 3-year old Camry Hybrid will pay itself off over the regular Camry in less than 5 years.

Finally, this line of thought that we should tear others down for trying to live environmentally-friendly is no better (in fact, much worse) than the reverse.

Not a fan of the recycled/repackaged podcasts -- there's nothing novel for those who have heard the material before, and it just means a longer wait until a fresh one.

Thanks for all the great material. However, I was disappointed that the "Show and Yell" podcast episode was just a re-hash of earlier episodes. Why not just tell it like it is and call it a re-run, or even an "encore performance"?

I hear today you are discussing restaurant etiquette and outrageous gastronomicc delights such as 'Mouse in your salad'..........this reminds me of one day, years ago when I was Maitre d' ing in a wonderful French bistre on Park Avenue South & 28th. St.......I was looking around the dining room , surveying, stroking the people,using my anticipation skills and making sure everybody was enjoying themselves when I heard a shreik, a cry for help , a middle aged woman with her napkin to mouth pushing away infront of her what looked like a simple green salad( mesclun,baby mixed greens were all the rage}.....I quickly jumped into action , removed the plate and went into the back and thus...behold, nestled in the middle of the 'baby lettuces, popping it's head thru' was mouse embryo ! I kid you not...my time in the library is up...john'o'

I am a regular listener & fan of the books & blog, but was disappointed in this rerun of a podcast. Didn't listen to it in entirety. Oh well. Looking forward to the next new one.

I just heard your story "A Mouse in the Salad" on WNYC, and thanks to you, Le Pain Quotidien has just _gained a customer_! Unlike [probably] most people, I actually like mice [when my cats got too old to keep them away, I got a humane trap and caught them one by one and released them in the local community garden], and would not have been freaked out to have found one in my salad, except to feel sorry for the mouse [though I would of course have sent it back] -- especially after hearing that it was most likely a field mouse from the organic produce supplier. Also, in Europe I doubt whether this incident would have raised such a stir -- remember RATTOUILLE. In any case, I liked the CEO's response and would all the more like to support such a business!

I downloaded this twice through ITunes and for some reason it cuts out the last minute. Not sure if it is just me.

I swear this is a re-run. Boo.

Randome question: Who sings and what is the name of the song used at the end of the podcast?
Thanks!

What wat the last track played before the credits? It was amazing! Awesome show, btw...

I think the Sexton twins are missing something important. They seem to presume that driving a Prius or any other showy action showing altruism is selfish:

"...[W]hat’s interesting about these conceptions of altruism, both competitive altruism and reputational motivations for altruism is that they’re fundamentally selfish."

They don't appear to consider the reason that people might have is an attempt to influence others' behavior.

This motive can also apply to someone driving a Prius. The Sexton twins seem to jump to the conclusion that a Prius driver's motive is "I care more about looking environmentally-conscious than actually being it," whereas a large part of their motive is "I'm trying to do something about the environment, I'm not ashamed of it, and perhaps you should too."

The same goes for people putting solar panels on the shadier street-side of their house, or the BBC touting the energy generate by their solar panels - being showy in this case is more about influencing the behaviors of others than feeling good about oneself.

I'd be interested to hear if the Sexton twins even considered this.

A resounding BOO to the critic complaining about the quality of one of Pavarotti's last performances. The voice that was "gone" at that point had been one of the most sublime voices on the planet. Probably the reason people didn't boo was that, unlike the critic, the audience revered and respected Pavarotti for what he had been and for the great pleasure he had given to fans over many years. Park and bark, indeed. What an ungrateful misanthrope. BOO!

I would like to suggest the presence of a more rational social benefit that comes from Conspicuous Preservation, and from something as irrational as VOTING.

Doctors Christakis and Fowler of Harvard explore the effects of social networks in their 2011 book CONNECTED. If I vote, or wear a bumper sticker, or drive a Prius, and if I do so conspicuously, I influence the behavior of those in my social networks. It makes them more likely to do what I do, and the effect radiates out like ripples in a pond. My vote can become five or ten votes!

Therefore, if I do something silly like put solar panels on the shady street-facing side of my house, I may be rationally calculating that it will influence some number of other people to buy solar panels of their own. As a concerned GREEN, this may be what I'm really going for!

Thanks for the good program.

I've lived in Philly all my life and have been tormented by NY fans with the Santa Story, but had never heard of it. Applause, Freakonomics.

Who sings the version of "That's Life" that plays at the end of the baseball players piece?