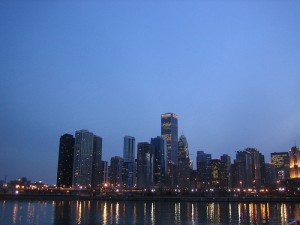 It strikes me that the same could be said of cities. And I’d put Chicago near the top of any list of cities that have done a lot. From an East Coast view, or West, it can appear that Chicago is the middle of nowhere. In this week’s podcast, we make the argument that Chicago is, in fact, the middle of everywhere. (You can subscribe at iTunes, get the RSS feed, or listen via the media player above. You can also read the transcript below; it includes credits for the music you’ll hear in the episode.)

The episode features Thomas Dyja, the author of several books

, most recently The Third Coast: When Chicago Built the American Dream

. He talks about 10 things that Chicago gave the world, some of them surprising and some just forgotten. Dyja isn’t arguing that Chicago is still in its heyday — it is almost certainly not — but he make a persuasive case that it is underappreciated on many dimensions, and that the world would be a very different place if Chicago hadn’t been so busy being Chicago.

You’ll also hear Steve Levitt talking about what makes the University of Chicago economics department unlike any other such department, and why Levitt’s academic career — all that vice! — would have been so boring if he’d wound up at someplace like Princeton instead.

Special thanks to mixmaster David Herman and choreographer Suzie Lechtenberg for digging up archival audio that makes this episode truly sing.

Interesting and awesome show as always! It made me want to visit Chicago.

I think it was inclusive of women as well, in the early days at least. You have to understand that Playboy in the 1950s was a COMPLETELY different publication than Playboy today. It was all about liberating men AND women from repression and letting people live and think more freely. The nude pictures of women was a major part, but it didn't dominate the magazine like it does now, and in the context of the 1950s, when women still thought of their bodies as something shameful that should be hidden, you could argue that it was in fact liberating for women. Also, editorially, the magazine was very pro-feminist and a very strong supporter of issues like legalizing abortion.

As time went by, though, they decided there was more money in playing up the sexual titillation. Once they started opening the Playboy clubs and making the Playboy Bunnies central to their image, the politics became much less important, and they have turned into an institution that has definitely hurt the feminist movement more than they ever helped it.

In this century I think you're looking for Omaha, NE.

Very good podcast. But I am puzzled that you have included Hugh Hefner and Playboy as one of the top 10 things Chicago gave to the world. From a female perspective, it seems like this person has damaged female sexuality more than helped. Not a good contribution unless you guys were also including people who also set back social progress. In that sense Hugh Hefner should be there. (as you can see evidence in the way women are still being treated around the world and in the U.S.) So this was definitely male bias about great things Chicago contributed and not very justifiable in the sense of the repercussions of sexism that women still endure today. But this is my opinion anyways.

Unlike those sexually-liberated females proudly strutting their half-naked (or mostly-naked, topless) bodies around while proudly proclaiming themselves to be "sluts"? That's breaking free of the patriarchy, all right. Contrary to the protestations of facile feminists, it is the feminist "movement" that has done the most damage to women, because who can take seriously anybody that acts like a truculent 6-year-old without a cookie?

We get both end of the spectrum as women. Crazy feminists or crazy conservative. No one can dismiss the double standards women still endure though, compare to their male counterparts. I would like to walk around in my birthday suit (especially in this heat) but in this patriarchal society, that's open invitation for unwanted sexual advances from men (not all men, most men I think would appreciate it). Which is strange because naked is such a natural thing! And it's quite humorous that a man has made exploiting a natural thing a profit! Sexually active or just flaunting their body, women can be sexually free if they're not going to be harassed for trying to be free, with such words as mentioned, "sluts" (which seems like such a word a closed minded person will call themselves). Sex should be enjoyed by the person and with others, and not profited, but that's a whole other issue. So until people can be less degrading about a women's body and not make it such a object of fantasy. I think I can enjoy my nakedness a little more (harassment free).

Thank you for your opinion by the way. I enjoy hearing from other perspectives.

Your guest forgot one other important Chicago event, the first sustained nuclear reaction that happened under the stands of Stagg Field.

It's in the podcast, very briefly. Here's the full quote on the subject:

I stand corrected, thanks! :)

Thanks for this episode. I was born and raised in Chicago ( moved to Brooklyn last year ).

Seeing the vast differences--yet appreciating the lessons learned from the "proving grounds" of Chicago, really makes this episode pop for me.

What about packaged-goods advertising, by companies such as Leo Burnett? Because of their influence, radio advertising production was centered in Chicago, even long after the demise of big-time network radio. Burnett, for its client Kellogg, made an art out of recombining grains and sugar into dozens of different boxed cereals each with their own characters and their own stories.

Not to mention the effect of Sears, Roebuck & Co!

Q: Did you hear about the million people in Chicago who just got injured?
A: The wind quit blowing. They fell down.

Bah-dum. I'll be here all week. Be sure to tip your waitress.

Great podcast, as always. Just wondering - could the Chicago referencing style be added as No. 11?

Just listened to your pocast about 10 things Chicago has given the USA.
No mention of Frank Lloyd Wright?? Or a writer named Studs Terkel??
Whazzup wit dat??

Everyone knows bad sex is more vital and meaningful than art.

"Despite Chicago's claim as birthplace of the skyscraper, by 1940, nine of the 10 tallest buildings in the world were in New York."

Do anyone really know that Muddy Waters title song that is playing in this show is damn good?

MY GRANDSON FROM OREGON SENT THIS TO ME . HE LISTENED TO THIS ON HIS WAY TO MONTANA. I KNEW ALMOST EVERYTHING ABOUT MY HOME TOWN, BUT, I REALLY LEARNED SO MUCH. WISH THE WHOLE WORLD WOULD LISTEN TO THIS, AND KNOW THAT CHICAGO IS NOT THE CRIME TOWN WE ARE KNOWN FOR.

Does anyone know the Muddy Waters song that is playing in this show?