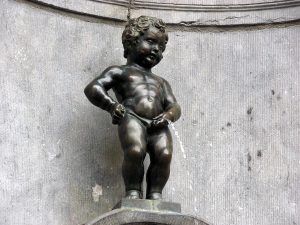 The discovery of phosphorus, 50 years after this statue was erected, involved a lot of urine. (Photo: Wikimedia Commons)

Hennig Brand was an alchemist on a mission: transmute urine into gold. In the 17th century, he gathered about a thousand gallons of pee and boiled it down to separate out a substance that he believed would give him gold.

Obviously, if he had succeeded, we all would know about it. But what he did find was white phosphorus, which self-ignites in the air. He called it cold fire. Today we use it in explosives, fireworks, and fertilizers — and that red strip on the side of matchboxes is just red phosphorus waiting to react to the sulfur on the match head.

Tell Me Something I Don’t Know is on the weird side of the tracks in Philadelphia with everything you’ve ever wanted to know about graffiti, cockroaches, tattoos, pee, and more. James Altucher (host of The James Altucher Show) is our special guest co-host, with Mike Maughan (head of global insights at Qualtrics) as real-time fact-checker.