Whatever Happened to the Carpal Tunnel Epidemic? (Ep. 138) 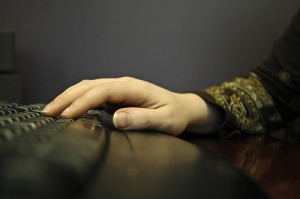 This week’s episode asks “Whatever Happened to the Carpal Tunnel Epidemic?” (You can subscribe at iTunes, get the RSS feed, or listen via the media player above. You can also read the transcript; it includes credits for the music you’ll hear in the episode.)

Stephen Dubner recalls his days at The New York Times (where he wrote stuff like this, this, and this), when newsrooms were full of two kinds of people: those suffering from wrist pain and those who feared they soon would. Many people had some sort of elaborate computer keyboard setup to remedy the situation — including Steve Levitt, who used a keyboard that folded up in the middle to ease his wrist pain. (He’d been keying in hours and hours of data. Levitt claims it was worth it, by the way: the data led to a paper about campaign spending, which he says was his “first good journal publication.”)

So where did all those white-collar carpal tunnel syndrome victims go?

We get the story from Bradley Evanoff, an M.D. and a professor at Washington University in St. Louis, where he studies occupational medicine. He traces the history of the ailment and points out that the epidemic seems to have started shortly after carpal tunnel syndrome became a compensable disorder:

EVANOFF: I think that prior to around 1985 or so there are really very few cases of carpal tunnel syndrome that are paid for out of workers’ compensation. And then you see this big growth between 1985 and about 1995 where many more cases are claimed as work-related. And this is the so-called epidemic of carpal tunnel syndrome that got people quite interested in and focused on CTS in the late 80’s early 90’s.

But was the computer keyboard really such a huge risk factor? Evanoff talks about what kind of workers are at the highest risk (it’s neither economists nor journalists), and what the numbers look like today. While we don’t hear about carpal tunnel syndrome much these days, it certainly hasn’t gone away: Evanoff estimates that 1 to 2 percent of American workers suffer from it. So why don’t we hear about it more often?

Special thanks to Ryan Hagen for his help producing this episode.

I had it. I just changed the way I hold my mouse and keyboard.

It seems that once people find out you can be compensated for an ailment, there are a million people ready to sign up. An easy way around this would be for companies to give people a "typing test" during an interview and see if people complain about wrist pain, or see if it comes up during the interview.

It would be interesting to see a factual account of what happened. Certainly I know people that suffer from stress related physical disease. I cannot do any repetitive action without pain.

Maybe we don't hear about it because of 9/11 and terrorism wiped lower level problems off the news. When it was a "horror epidemic" threatening to "disable our whole workforce" and constantly in the news it seemed like a big thing. Probably the incidence has remained about the same but there are always bigger stories. Even things like "deafly flu epidemic" can only command headlines for a short period. Newspapers rely on constant novelty and intense stimulus to addict readers to coming back. Unless the story gets a new twist it cannot keep running. News is like Crack. Short, sharp shock followed by loss of interest in life.

It might be interesting to look at other factors like improved keyboard design generally. Certainly monitors have got larger, brighter and clearer which has had a positive effect on ergonomics. Standard office furniture is more ergonomically sound these days also. Ironically the internet might have taught people to relax around computers - working with the bastard things used to be a lot more stressful and there was no upside, whereas now they are a primary source of entertainment for many. I think probably office lighting has improved as well. Education must have helped. Health and safety legislation in many countries probably influenced employers to take action over ergonomics rather than letting workers injure themselves.

I'm not sure it's true that compensation was withdrawn evenly around the world. It seems to be Americans making that comment. But RSI was a worldwide phenomenon and compensation continued in other countries in which it is equally out of the news now. On the face of it those who focus on compensation are are just being cynical and blaming the victims.

This podcast left me with only one question: What's with the pigeon?

Who knows? All I know is that we need more of them!

Hate to say it, but we're a nation of wimps. Work at a key board? Set your alarm for every 45 minutes, then jump up and do 50 push-ups. Guaran-freaking-tee you you won't get flannel carpet whatever. Plus it cures Ticonderoga #2 Neck syndrome.

I'm a software engineer and had carpal tunnel syndrome (very painful), and it was hampering my career. But then I was extremely lucky and found out that carpal tunnel syndrome is actually just http://en.wikipedia.org/wiki/Tension_myositis_syndrome. I've written my story here: http://www.ryancwalsh.com/mindbody/ If you're suffering from any type of RSI, you'll be amazed.

I think you give a big part of the answer yourselves: "...as I finished typing the data, I ran into a professor at Harvard who said, “Oh, you just typed in that data? I’ve already had all that key punched." These days, comparatively few people pound their keyboards for hours on end, mindlessly transcribing data from print (or handwriting) to disk. Nowadays most of it is on-line ab initio, whether it's Congressional elections, my bank statements, or the UPS guys tracking packages. When we do email, writing, or coding, there is (at least for some of us) more time spent thinking about what to type than actually hitting the keys.

What happened to all the Carpal Tunnel in the U.S.? Easy: it was outsourced with all the other data entry jobs.

I've experienced symptoms of carpal tunnel in the past and successfully gotten rid of them (as well as other chronic pain conditions/unexplained medical problems) using psychological principles.

I've described the techniques I used and have suggested resources that can help anyone here:

Other articles that may be helpful:

I hope this helps!
Katie

First, I think James is spot on. Beyond that, the healthcare market is driven more by economic factors -- marketing, government payments, and insurance -- than by dramatic shifts in actual health conditions.

Marketing plays a HUGE role in the trends of diseases. Whatever pharmaceutical and device companies push on their physician customers becomes top-of-mind for the doctors. My doctor asked -- unsolicited -- whether I have Attention Deficit Disorder. I asked, "Is there any patient who answered your ADD diagnostic questions who did NOT show signs of ADD? Forget it." Many of us have latent conditions, or conditions where symptoms are not life-altering.

Then there is the explosion in federally paid worker's disability -- 16% of the workforce is now on government-paid disability. This alters our culture and correlates with economic conditions. Since 2003, there's been a 44% increase in disability claims by people formerly in the workplace. If the government support was withdrawn, many of these people would certainly find tolerable work to support themselves, but the incentives are artificially warped by the availability of government disability payments. Economists note that disability claims skyrocket during recessions.

And certainly there is a link between a condition being covered by insurers and the ratio of sufferers who will seek treatment. Hip and knee replacements are covered by insurers, but it is an "elective surgery" in that you can live without it, albeit at a much lower level of functioning and quality of life. But the correlation with insurance is paramount; very few people in the U.S. have these joint replacement surgeries if they don't have insurance. If insurers stopped paying for this surgery, the prevalence of joint pain would virtually disappear -- not because fewer people are suffering, but because fewer people could afford treatment, so it would go untreated and unreported in data.

Please bring back the pigeon soon and often and/or feature other talking animals regularly. :)

I think we've also gotten better at diagnosis, so that "carpal tunnel syndrome" means actual CTS, and not just anything that happens to produce wrist pain. I know people whose "carpal tunnel" problem was actually tendonitis or higher up in the arm (one was referred pain from a disk in the neck). When 10 people have the same thing, rather than 10 people having six things, you get a different publicity effect.

The syndrome has gone down as Mobile computing (Smart phones and Tablets) are selling more. Q3, 2013 is the first quarter when the shipment of mobile devices is higher than PCs.

Mobile devices don't require hand/finger movements in the manner that you do when you use a laptop and/or desktop with a mouse clicks. In my personal case, I use laptop/desktop 50% less than about 10 years ago. I have personally had got affected with Carpel Syndrome before and I can vouch it does not happen any more.

Amanda, your post is hysterical. The connection between carpal tunnel syndrome and handjobs is a stroke of genius.

I'm an anatomy student, and my professor (a retired surgeon) would often mention that carpal tunnel treatment is one of the most rewarding operations he would perform: it's simple, not very invasive, can be done under general anesthetic, requires very little down-time afterwards, almost always provides near instantaneous relief, and very few patients (none during his career) come back afterwards with subsequent complications. The surgeon simply cuts the transverse carpal ligament, relieving the painful pressure on the median nerve. This isn't like back surgery, which rarely solves the underlying problem for good.

Just a thought, maybe the people who were in the most pain have gotten their medical compensation, and received efficient treatment.

I had it. It didn't quite go away but I managed it. A large part of it seems psychological

And...(I think it was mentioned here years ago)...what ever happened to whiplash?

I dunno, but I'm glad I didn't sign up for the surgery.

These twenty odd years the pain has be mostly absent after following the hygiene rules the PT gave me, along with it it turns out (apparently) occasional visits to the chiropractor, and use of the wrist-splints (when I have fallen into bad habits and a wrist hurts, I wear a splint until the discomfort of the splint exceeds the discomfort from the bad habit).

BTW, I am convinces that the mouse is the worst offender, enabled by bad habits.