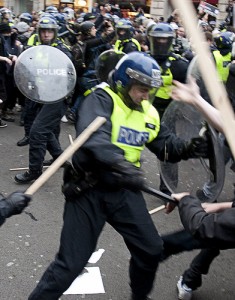 Do Budget Cuts Cause More Riots?

The UK riots continue as PM David Cameron and the Metropolitan police flood London with 16,000 officers in hopes of calming the civil unrest.

Critics have suggested that this is the behavior of a generation that's been ignored by the establishment. The anarchy on the streets of London has been attributed to high unemployment and disaffected youth, combined with a trigger event -- the death of Mark Duggan, shot by police last Saturday.

A couple weeks ago, Jacopo Ponticelli and Hans-Joachim Voth put out their working paper "Austerity and Anarchy: Budget Cuts and Social Unrest in Europe, 1919-2009." It uses cross-country data in the 90-year period to examine whether riots and civil unrest increase as governments cut spending. They found a positive correlation between social instability and budget cuts.