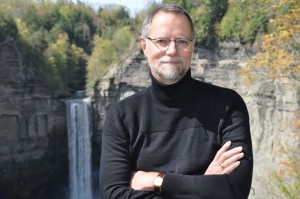 We recently solicited your questions for Cornell economist Robert Frank, whose new book, The Darwin Economy: Liberty, Competition, and the Common Good, argues (among other things) that competition has made the U.S. economy less efficient. Frank now returns with answers to your questions. Thanks to everyone who participated.

Back in 2007, we had a lively debate around a series of excerpts that Cornell economist Robert Frank contributed to the Freakonomics blog. We're hoping an excerpt from his latest book,  The Darwin Economy: Liberty, Competition, and the Common Good, will spawn a similar conversation.
In it, Frank makes a rather bold prediction: within the next century, Charles Darwin, the naturalist, will unseat Adam Smith as the intellectual founder of economics. Frank believes Darwin's insights into the nature of competition describe our current economic reality far better than Smith's invisible hand. Frank argues that we live in a world where competition doesn't channel self-interest for the common good, but rather into unbridled "arms races" where relative position is pursued above all else: who has the biggest bank? The biggest house? These races rarely benefit group interests. In fact, Frank argues, they have done enormous harm to our economy and provided no lasting advantages or benefits, since gains tend to be relative and offsetting.

One session at the recent AEA meetings addressed "popular economics," with a panel including Diane Coyle, Robert Frank, Steve Levitt, and Robert Shiller. (Shiller wrote a bit about it on Slate.) Many interesting things were said. To me, the most interesting was that Frank is writing a book arguing that Charles Darwin, more so than Adam Smith, is the true forefather of modern economics. (He has already written a Times column on the topic.)

this year, Darwin's 200th anniversary, Americans favor intelligent design over Darwinian theory. According to the poll, 33 percent of respondents said they agreed with Darwinism, but 52 percent agreed that “the development of life was guided by intelligent design." On the other hand, the poll was commissioned by The Discovery Institute, which advocates intelligent design.

Today, as you've probably heard, is the 200th anniversary of both Abraham Lincoln and Charles Darwin. Lincoln always gets lots of ink, so it's especially nice to see all the attention being paid to Darwin; this piece is particularly good.