Obesity — its causes and consequences — is a frequent topic on this blog (and the podcast too). In the podcast, Eric Oliver argued that “the causal relationship between weight and maladies like heart disease, cancer, and even diabetes has not been firmly established.” That certainly strikes some as heresy. In a recent EconTalk podcast, noted heretic Gary Taubes lays out a well-argued position:

Taubes argues that for decades, doctors, the medical establishment, and government agencies encouraged Americans to reduce fat in their diet and increase carbohydrates in order to reduce heart disease. Taubes argues that the evidence for the connection between fat in the diet and heart disease was weak yet the consensus in favor of low-fat diets remained strong. Casual evidence (such as low heart disease rates among populations with little fat in their diet) ignores the possibilities that other factors such as low sugar consumption may explain the relationship.

Anyone for the paleo diet?

A new research paper by Lisa Dettling and Melissa Schettini Kearney from the University of Maryland examines whether the fluctuation in home prices affects fertility rates. The authors used Vital Statistics data from 1990 – 2007, and Federal Housing Finance Agency Price Index (and alternately the Case-Shiller Index) to simulate equity/fertility correlations.
From the abstract:

What Drives Obesity? An Economist Takedown of The Economist

Is higher obesity due to the rise in driving? Perhaps. It’s an intriguing hypothesis. But our friends at The Economist should know better than to report nonsensical correlations. Here’s the evidence they cite (drawn from this entirely unconvincing research paper published in Transport Policy): 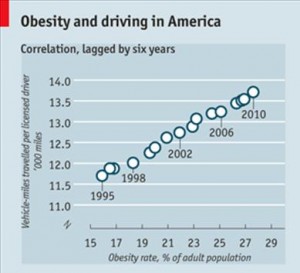 Looks impressive, right? (Well, apart from putting the explanatory variable on the vertical axis.) But before concluding that there’s anything here, let’s try a different variable, instead—my age:

So, yesterday I wrote about the handful of studies that have been done showing that large sporting events do not lead to higher rates of hospital visits, or for that matter, deaths or public violence. The latest study comes from Canada, and showed that during the 2010 Olympic gold medal ice hockey match between the U.S. and Canada, that emergency room visits declined by 17 percent in Canada. I thought it was a pretty good indication of how much Canadians love ice hockey, and also of the tranquility with which they seem to consume it. I imagined an entire country transfixed by the game on their TV sets, peacefully watching their countrymen beat the world in their most-beloved sport.
But then I saw this: “Vancouver Fans Riot After Stanley Cup Loss” And read this:

You may have heard of Google Trends. It’s a cool tool which will show you the ups-and-downs of the public’s interest in a particular topic—at least as revealed in how often we search for it. And you may have even heard of the first really important use of this tool: Google Flu Trends, which uses search data to try to predict flu activity. Now Google has released an amazing way to reverse engineer the process: Google Correlate. Just feed in your favorite weekly time series (or cross-state comparisons), and it will tell you which search terms are most closely correlated with your data.
So I tried it out. And it works! Amazingly well.

How do people who love salty snacks like their toilet paper to hang?  Are fans of carbonated beverage more likely to enjoy horror movies?  A new website, www.correlated.org, has the answer to such pressing questions.  Founded by Shaun Gallagher, the brains behind last year’s UnofficialCensus.org, it aims to uncover one surprising correlation a day.

So Long and Thanks for All the F-Tests

I’ve been reading a truly excellent book by Joshua Angrist and Jorn-Steffen Pischke called Mostly Harmless Econometrics: An Empiricist’s Companion. It’s not written for a general audience, but if you pulled an A- or better on a college-level econometrics course (and if you love Freakonomics), then this is the book for you. It should be required reading for anyone who is trying to write an applied dissertation. It is the rare book that captures the feeling of how to go about trying to attack an empirical questio; and it does this by working through two or three dozen of the neatest empirical papers of the last decade (often coauthored by Angrist). It is also peppered with references to Douglas Adams‘s writing — so what’s not to like?

At about 8:30 a.m. yesterday, Yahoo!’s Tech Ticker posted an interview with Barry Ritholtz, noted finance guy and blogger. In recent times, he has also been very bearish on the market. But he thinks the bottom may be near. Here’s his money quote from the interview: “There’s a big bear market rally coming.” Seven and a half hours later, the . . .

An article in The Economist reports that “the lipstick index,” the theory that women buy more lipstick in tough economic times, is probably not valid. A better index might instead be hairstyles. As The Independent reports, Japanese researchers found that women tend to have longer hairstyles when the economy is doing well, and shorter styles during harder times. Later on . . .

When I first stumbled onto the name voyager at the Baby Name Wizard a few years back, I felt like I was seeing the future. It was the sort of web tool that folks dream about. I had exactly the same feeling when I recently visited Gapminder.org. They have an interactive data tool called “gapminder world” that is truly remarkable . . .

Should Mayor Daley Decree that All Chicago Bears Fans be Happy Tomorrow?

On the first day of class, I tell my undergraduates that if they only learn one thing in my course, I hope that it will be to recognize and appreciate the difference between correlation and causality. Most of the students laugh smugly, thinking they already know the difference. It never ceases to amaze me, however, when a cleverly designed exam . . .