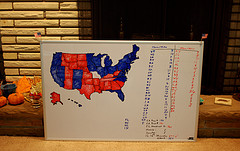 Writing for Bloomberg, Chris Christoff and Greg Giroux explore the math behind gerrymandering in Michigan with some fascinating examples and graphics.  The 14th congressional district, for example, looks pretty weird from high up:

Michigan’s 14th congressional district looks like a jagged letter ’S’ lying on its side.

From Detroit, one of the nation’s most Democratic cities, it meanders to the west, north and east, scooping up the black-majority cities of Southfield and Pontiac while bending sharply to avoid Bloomfield Hills, the affluent suburb where 2012 Republican presidential nominee Mitt Romney was raised.