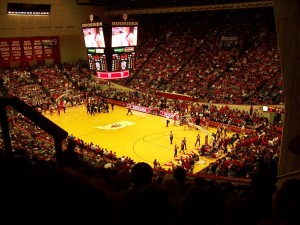 Our latest Freakonomics Radio on Marketplace podcast is called “How Money Is March Madness?”  (You can download/subscribe at iTunes, get the RSS feed, listen via the media player above, or read the transcript below.)

The gist: the annual NCAA basketball tournament grabs a lot of eyeballs, but turning them into dollars hasn't always been easy -- even when the “talent” is playing for free.

Last year, March Madness reportedly earned its highest TV ratings in 18 years. This year's Super Bowl, meanwhile, was the third most-watched broadcast in TV history (behind two earlier Super Bowls), despite (or because of?) an electrical blackout. Interestingly -- to me, at least -- these two premier TV sporting events are sold very differently: the Super Bowl rotates annually among one of three networks while the NCAA is in the midst of a 14-year contract with CBS and Turner Sports. How does that difference affect ad revenue?