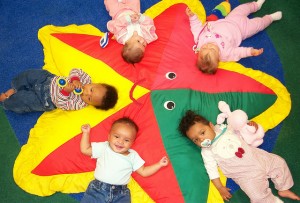 During World War II, U.S. women entered the workforce in record numbers -- factories full of "Rosie the Riveters" producing planes and munitions for the war effort.  In response, Congress passed the Lanham Act of 1940, which administered and subsidized a large childcare system in 635 communities in the whole country except New Mexico from 1943-1946.  A new paper by Chris Herbst examines the effects of the Lanham Act; his research is particularly relevant in light of President Barack Obama's push for universal preschool.  "What's intriguing about the Lanham Act is that it's the U.S.'s first, and only, laboratory within which to assess universal child care," writes Herbst in an email about the paper. "It may just be the coolest child care program you've never heard of."  Here's the abstract:

This paper provides a comprehensive analysis of the Lanham Act of 1940, a heavily-subsidized and universal child care program that was administered throughout the U.S. during World War II. I begin by estimating the impact of the Lanham Act on maternal employment using 1940 and 1950 Census data in a difference-in-difference-in-differences framework. The evidence suggests that mothers’ paid work increased substantially following the introduction of the child care program.