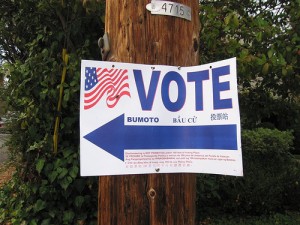 Why Do We Vote? So We Can Tell People We Voted

We once wrote about reasons to not vote, at least from an economist's perspective. Since a single vote almost never alters an outcome, what's in it for the voter?

If a given citizen doesn't stand a chance of having her vote affect the outcome, why does she bother? In Switzerland, as in the U.S., "there exists a fairly strong social norm that a good citizen should go to the polls," [Patricia] Funk writes. "As long as poll-voting was the only option, there was an incentive (or pressure) to go to the polls only to be seen handing in the vote. The motivation could be hope for social esteem, benefits from being perceived as a cooperator or just the avoidance of informal sanctions. Since in small communities, people know each other better and gossip about who fulfills civic duties and who doesn't, the benefits of norm adherence were particularly high in this type of community."

Cathal Morrow, who's in the midst of a year without unhappiness following his year without lying, has a new project: "Me Me Me Plc, a company he plans to float on the London Stock Exchange by selling shares in himself. It's ?10 a share, which gets you a photograph of Cathal in lieu of a share certificate."

How to Tell When a CEO Is Lying

In a nifty piece of forensic analysis, two researchers claim to have figured out how to tell when executives are lying. David Larcker and Anastasia Zakolyukina analyzed 30,000 conference calls between 2003 and 2007 to see if certain "tells" during the call were associated with earnings that were later "materially restated."

A Year Without Unhappiness?

Watch What You Draw

Liars may betray their actions through drawing.

How to Call Someone's Bluff and Keep Your Gold

I'm watching Deadwood, the remarkably well-written HBO series of a few years ago. In Episode 16, several wealthy townspeople, including the hotel owner, are spreading rumors that the gold field claims will soon be voided.

Photo: DeusXFlorida Coke has a new ad that declares that only two people know Coke’s secret formula, and if something happened to one of them, the formula would be lost forever. It then goes on to talk, facetiously, about all the terrible things that would happen to the world if something bad happened to one […]

The first time I got a letter in the mail from Who’s Who saying that they wanted to include me, I thought I was pretty special. I had just gotten my Ph.D. and was at the Harvard Society of Fellows at the time. I called my Dad to brag. He laughed out loud at me. […]

Why Do You Lie? The Perils of Self-Reporting

I am always surprised at how easily, and cheaply, we humans lie. Have you ever been in a conversation about, say, a particular book and been tempted to say you’ve read it even though you haven’t? I am guessing the answer is yes. But why would anyone bother to lie in such a low-stakes situation? […]