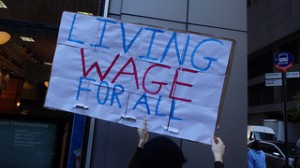 Why Do Some Jobs Pay So Little?

A recent one-day strike by fast-food workers has called attention to the low wages in the industry. James Surowiecki offers one reason that the issue's visibility has increased recently:

Still, the reason this has become a big political issue is not that the jobs have changed; it’s that the people doing the jobs have. Historically, low-wage work tended to be done either by the young or by women looking for part-time jobs to supplement family income. As the historian Bethany Moreton has shown, Walmart in its early days sought explicitly to hire underemployed married women. Fast-food workforces, meanwhile, were dominated by teen-agers. Now, though, plenty of family breadwinners are stuck in these jobs. That’s because, over the past three decades, the U.S. economy has done a poor job of creating good middle-class jobs; five of the six fastest-growing job categories today pay less than the median wage. That’s why, as a recent study by the economists John Schmitt and Janelle Jones has shown, low-wage workers are older and better educated than ever. More important, more of them are relying on their paychecks not for pin money or to pay for Friday-night dates but, rather, to support families. Forty years ago, there was no expectation that fast-food or discount-retail jobs would provide a living wage, because these were not jobs that, in the main, adult heads of household did. Today, low-wage workers provide forty-six per cent of their family’s income. It is that change which is driving the demand for higher pay.

Given that reality, Surowiecki writes, raising the minimum wage by a few bucks a hour won't fix the problem. His prescription: more truly middle-class jobs and an expansion of the social safety net. "Fast-food jobs in Germany and the Netherlands," he writes, "aren’t much better-paid than in the U.S., but a stronger safety net makes workers much better off."

Every time I visit Australia, one of the first things I see in the news is a discussion of minimum wages. Pay rates in Australia are to some extent set by the government; these days by the Fair Work Commission.  Today there is a news story that a labor union will seek to have teenagers paid the same wage as adults for the same job.  This increase in youth wages will decrease the quantity of young workers demanded, especially as that demand is typically quite elastic. Worse still, this will prevent some kids from obtaining job experience, thus reducing their human capital and making them less employable in the future.  As Peter Seeger sang, “When Will They Ever Learn?”

Benjamin Franklin on the Minimum Wage

Benjamin Franklin apparently understood the notion that input prices affect product prices, which is a problem because product demand curves are not completely inelastic.  Discussing a minimum wage, he noted, “A law might be made to raise their [workers’] wages; but if our manufactures are too dear, they might not vend abroad.” This is one of the best arguments against a minimum wage: in an open economy, which the U.S. increasingly will be at least partly passed on in the form of higher product prices, which will in turn reduce product demand—and eventually employment.   (“On the Labouring Poor,” The Gentleman’s Magazine, April 1768.)

President Obama has proposed increasing the federal minimum wage from $7.25 to $9. Since the demand for low-skilled labor is quite elastic, this will kill off a few jobs that would otherwise have been created. Not very many, because relatively few people would otherwise be paid between $7.25 and $9 anyway (in an economy with an average wage of about $20/hour); but this is a job-killing idea.

The President’s proposal to index the minimum wage to the CPI is nearly excellent (except we should tie it to average wages, not the CPI).  Doing this would end the repeated fighting over the minimum wage that distracts attention from other labor issues that are so very much more important. It would be a great saving of political energy not to have to debate the minimum wage year after year.  I’d even be willing to see it increased to $9 next year if in addition it were indexed as I propose.