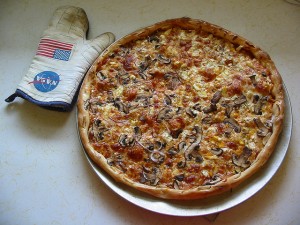 In our podcast "Waiter, There’s a Physicist in My Soup!," we talked to  Pablos Holman at Intellectual Ventures about food printers (we've also blogged about organ printers and meat printers). Now NASA is funding an Austin, Tex., company that is working on a pizza printer. From CNET:

Systems and Materials Research recently received a $125,000 grant from NASA to make a pizza. OK, it's a little more complicated than that. Contractor already created a proof-of-concept printer that can print chocolate onto a cookie. His next goal is to print out dough and cook it while printing out sauce and toppings. 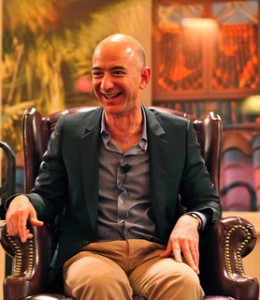 Fascinating story, told straight-ahead here by Reuters, and by Bezos himself here, with great photos and some commentary. From the Reuters article:

A recovery team funded by Amazon founder Jeff Bezos has plucked two rocket engines from the floor of the Atlantic Ocean that were used to send astronauts to the moon more than 40 years ago.

Located several hundred miles off the east coast of the United States (see this cool GeoHack map identifying the location of S-IC wreckage from the Apollo missions), the engines remain the property of NASA. Bezos said when he announced the salvage mission last March that if one engine was recovered, the space agency would likely want it displayed at the Smithsonian but that he'd asked NASA to allow a subsequent recovery by his privately funded team to be housed at the Museum of Flight in Seattle, Wash., where Amazon is headquartered.

Why It Wasn't a Small Step for Women

Women are lighter and thus cost less than men to transport to space, they're less prone to heart attacks, and they do better in isolation tests, reasoned Randy Lovelace when he founded the Women In Space Earliest program in 1959 to test women for their “qualifications as astronauts,” as this Wired article reports.

Last week, we solicited your questions for former astronaut and second man on the moon Buzz Aldrin, and we asked him a few of our own:

Bring Your Questions for Buzz Aldrin

Aldrin has agreed to take your questions -- about NASA, walking on the moon, the value to society of space exploration, or anything else you can conjure -- so ask away in the comments section below. As with all Q&A's, we will post his answers here in a few days.

After bad weather foiled several launch attempts, the Space Shuttle Endeavor finally took off last night from the Kennedy Space Center in Florida's Cape Canaveral. With stormy weather so typical there, why does NASA continue to use it as a launch site?

NASA research suggests that there may be life on Mars after all -- but that, up 'til now, we've been destroying it when we visit. (Does this hurt the case for space exploration?) As New Scientist tells the tale, The Phoenix Mars lander, which NASA uses to search for organic compounds on the red planet, may have been mistakenly burning up those very compounds.

Is Space Exploration Worth the Cost? A Freakonomics Quorum

Warning: what follows is a long blog post, perhaps better suited for a newspaper or magazine, and it will at times require your close attention. But I believe it is easily one of the best quorums we’ve ever published here. I’d like to thank all the participants for their thoughtful, well-considered, and fascinating answers, and […]

Submit your entries for the new NASA slogan. Will humans evolve based on high carb diets? (Earlier) The latest in prediction markets: how good will a new product be? Vote for the future of Boston’s energy, design and healthcare.