Yesterday we gave an update on how attaching a lottery payout to bank accounts can help people save more money. A reader named Drew writes in about a different lottery nudge:

When I was studying abroad in China (2006) a friend told me that I should always insist on getting the receipt whenever I ate at a restaurant, because the receipts are scratch-off lottery tickets.

I didn't think very much of it at the time (as a visitor, I didn't think I'd ever collect any winnings), but one of the Freakonomics podcasts that talked about capturing unreported income (I think it was "The Tax Man Nudgeth") reminded me of their ingenious system to encourage customers to demand that restaurants report their income.

I wasn't sure if it was still going on, but this blog suggests that it still was at least a year ago. Here is an older post with a little bit more detail about the system.

Yesterday, Sanjoy Mahajan wondered why signs that encourage hand-washing are at the sinks, where hand-washing avoiders may not see them. What do you think of the placement of the sign below, reportedly in Bangalore? 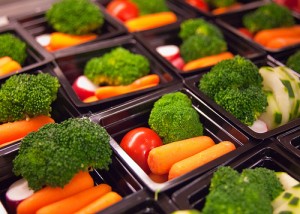 How to Make School Lunches Healthier

An article in Choices by David R. Just and Brian Wansink illustrates how school administrators can use behavioral economics to nudge kids toward good eating choices and away from the obesity-causing junk food. Just and Wansink point out that administrators often face a difficult choice between nutritious meals and the bottom line:

It may be possible to replace the standard cheese pizza on white flour crust with pizza smothered in spinach, artichoke hearts, and other vegetables on a whole wheat flaxseed crust. But the healthier pizza is more expensive, and fewer children may want to eat it. Hence many school districts walk a tightrope. School districts must increase the health content of their sales while trying to avoid any reduction in their financial viability. Eliminating the less nutritional items often means eliminating the meal budget’s highest margin items. Further, child patronage of the school lunch program is understandably dependent upon schools offering foods that students are familiar with and that they like, and that will satisfy their appetites.

A Small Nudge For College Enrollment?

A new working paper by George Bulman, a Stanford Ph.D. candidate and former Teach for America teacher, looks at whether having an in-school SAT or ACT testing center affects test-taking and college enrollment: Because the additional cost of taking the exam at a neighboring high school is very small, standard economic models suggest that there […]

Love Behavioral Economics? Want to Work for the British Government? All Right Then …

A lot of people write to us looking for work -- which, sadly, we are nearly always unable to provide. But once in a while we do hear of a good opportunity for the Freakonomically inclined. To wit:

The U.K. Cabinet Office's Behavioural Insight Team -- better known as the Nudge Unit because of its allegiance to the excellent Richard Thaler/Cass Sunstein book Nudge

-- is looking to expand. Here's the job listing. Some relevant excerpts:

Successful candidates will need to show that they:
1. have a good understanding of the behavioural science literature
2. have an understanding and ideally ability to conduct randomised controlled trials to test policy interventions; and
3. are highly motivated individuals capable of developing innovative solutions to often complex policy problems.
4. are strong team players

Candidates should be prepared to work on potentially any aspect of government or wider public sector policy. For example, over the past year the team has led work on health, energy, fraud, electoral registration, charitable giving, consumer affairs, the labour market, and access to finance for SMEs [that's Euro-speak for "small and medium enterprises"] 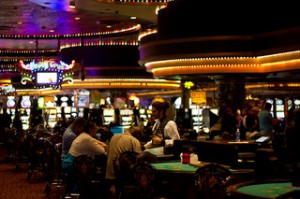 Anglicare, a Tasmanian welfare agency, has submitted a proposal to the Australian government's inquiry into problem gambling that would require pokies (the Aussie version of a slot machine) players to stand up while playing.  "We don't want to punish people, but there are things we can do to assist problem gamblers to get a break in play," said Chris Jones, the CEO of Anglicare. "If they want a break, they can sit elsewhere, but they don't need to take a seat in front of a machine."

Answer to Our Nudge Photo Contest

The results are in from the nudge photo contest we posted on Monday. Thirty-six out of 103 responses got it exactly right: to stop folks from urinating on the wall. Many also wrote that it was to prevent grafitti, so close but not (as I've been told) the exact motivation.

The first to answer correctly was, Skyjo, whose response was third overall.

Of the 36 correct answers, we randomly chose comment #63 by ann, "So that people won't urinate on the wall as a sign of respect."

Nudges aren't just for humans. Here is a photo, also from Jan Chipchase, of a similar nudge with the same exact goal of reducing public urination. This time the target is dogs, not humans. 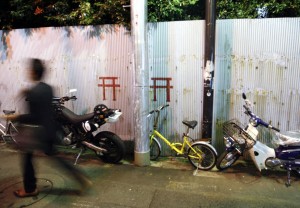 What is this photo about? It came to me courtesy of Jan Chipchase, a design guru who spoke at a great meeting last week on how to help microfinance meet the needs of clients better. As an aside, the most poignant question posed at this meeting of donors, investors, policymakers and researchers on microfinance: Why oh why did it take so long for "client needs" to be the topic of conversation? And the most important question posed: How can we go beyond understanding something about client behavior and choices and translate that knowledge to scalable policies for banking to the poor?

Anyhow, I digress, back to the contest. 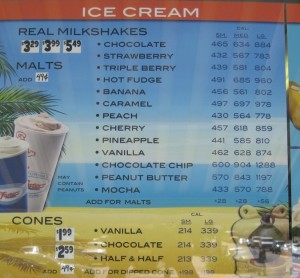 Staring at the menu board on a recent and rare trip to a California fast-food chain, I was stunned by the cost of a milk shake: 880. Eight dollars for a milk shake, really? Well, no. That was the cost in terms of calories. But I would have gladly traded that in dollars and cents to be spared the knowledge of how many calories my post-triathlon race reward would cost me. Feeling sufficiently guilty once confronted with the calorie content, I downsized and saved a couple hundred calories. But I left feeling dissatisfied and unambiguously worse off.

This kind of experience could be coming to a restaurant near you by January, when the FDA plans to roll out mandatory calorie labeling regulations approved by Congress in the same bill that authorized ObamaCare. At chain restaurants with more than 20 locations, you won’t be able to avoid the calorie information, which is prescribed to be posted on menus and menu boards near prices and printed at least as large. So much for the days of blissful ignorance.

While the calorie labeling law is intended to improve health outcomes for individuals, it is effectively a government-mandated guilt trip and a sign that libertarian paternalism—the seemingly benign notion that “choice architects” can “nudge” people to make better decisions for themselves—has gone too far.

What's the one thing that convinces Indian drivers to slow down?