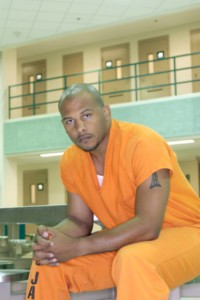 Why Do Black Men Live Longer in Prison?

A recent Reuters headline got a lot of attention on the Web. It read: "Black men survive longer in prison than out: study." Gawker picked it up; so did The Atlantic, Yahoo, and the Grio. I tracked down the study's author David Rosen, an epidemiology PhD and a post-doctoral fellow at the University of North Carolina, to see if this was actually the case. Rosen focuses his research on the health-care system inside prisons. For this latest study, he matched North Carolina prison records against state death records from 1995 to 2005, in order to compare the mortality rates of black and white male prisoners against their general population counterparts.

The results of his sample (100,000 men aged 20-79) were striking in how much they differed by race. While the total death rate of black men in prison is half that of black men in the general population, white prisoners die at about a 12% faster clip than their general population counterparts. This is essentially what a previous report by the U.S. Bureau of Justice Statistics found in 2007.

Rosen was good enough to answer questions about what he feels his study says about health-care, prisons and race.

A new study of capital sentences handed down in first degree murder cases finds evidence of racial bias against minority defendants who killed white victims. The study (abstract here; pdf here) was conducted by Harvard economist Alberto Alesina and Eliana La Ferrara of Universita' Bocconi. It finds that for sentences handed down to minority defendants convicted of killing white victims were as much as 9 percent more likely to be reversed than in cases involving a minority defendant killing a minority victim. The study examined the race of the defendant and of the victim(s) for all capital appeals that be came final in the U.S. between 1973 and 1995.

Did the Rooney Rule Really Work?

Last week, Tobias J. Moskowitz and L. Jon Wertheim wrote a guest post about black coaches in the NFL and the introduction of the Rooney Rule, which requires teams to interview at least one minority applicant when filling head-coaching spots. Moskowitz and Wertheim concluded that the policy change was successful: "The league achieved its aim. By 2005, there were six African-American coaches in the NFL..."

I told my wife that I'm happy when I run my best possible, which I did (25:58) in Sunday's Komen Run for the Cure 5KM race in Austin. She said that I should also be very happy that I took first place out of eight old guys in my age category (65-69).

Fran Blau is one of my favorite labor economists in the world: She's smart, savvy, tackles important problems, and also incredibly generous in helping younger scholars and colleagues with their own research. She is now also the winner of this year's IZA Prize in Labor Economics.

That might depend on your race. New research (ungated version here) from Shamena Anwar, Patrick Bayer, and Randi Hjalmarsson uses data from criminal trials and finds "strong evidence that all-white juries acquit whites more often and are less favorable to black versus white defendants when compared to juries with at least one black member."

There's a lot of talk about race these days. But high-frequency chatter can obscure some of the more important longer-term trends shaping the lives of African-Americans. Which is why Betsey Stevenson and I turn to the data, in a new paper, "Subjective and Objective Indicators of Racial Happiness."

Correct me if I'm wrong -- I couldn't find mention of it anywhere -- but as the NFL season opens, the Pittsburgh Steelers would seem to be the only team that's ever had three black quarterbacks on its 53-man roster: Dennis Dixon, Byron Leftwich, and Charlie Batch.

Race and Romance: An Uneven Playing Field for Black Women

A fascinating but depressing analysis of messaging at OkCupid.com suggests that discriminatory male preferences are a wider phenomenon.