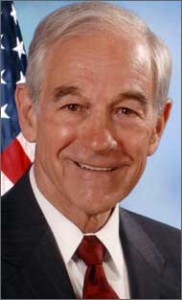 Back in 2008, shortly after the Presidential election, we solicited reader questions for Congressman Ron Paul, who had run for President that year. He happens to be running again this year and, in light of his strong third-place showing in the Iowa caucuses last night, I thought it might be interesting to republish his replies. They are well-considered and interesting throughout, and it is especially interesting to read them four years later in light of how political circumstances have shifted (or haven't).

Q.What was your first thought when you found out McCain chose Palin as his running mate?

A. At first, I thought it was a pretty savvy choice from a political perspective. I also knew that she had said some nice things about me in the past. At the same time, I knew that to be on the ticket, she would have to toe the line on foreign policy and the war, so that tempered a lot of my enthusiasm.

Q. Who in Congress would you consider to be your closest peer(s)?

A. There are a lot of members who I work with on a variety of different issues. Walter Jones is a good friend and works with me on foreign policy. Often on spending, if there is a 432-3 vote, the other two congressmen voting with me are Jeff Flake and Paul Broun. A lot of times, I work with Democrats on civil liberties issues. I guess my point is that people from all over the political spectrum can side with liberty and the Constitution. The goal is to get a majority to vote that way most of the time. 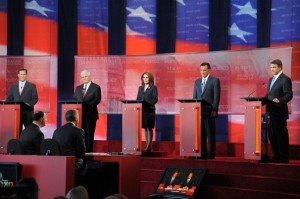 Today, it seems that everyone has their own opinion on who helped themselves and who didn't in last night's Republican presidential candidates' debate. And consensus is hard to come by, even in the same news room.

Take the Washington Post, for example. On its PostPartisan blog, first Richard Cohen wants us to think that Rick Perry was the "Big Loser" of the night. But then 90 minutes later, his colleague Marc Thiessen weighs in saying that Perry "had a very good night." Rather than relying on Beltway journalists to decide won and who lost, I figured: why not see what the market is saying? So I headed over to Intrade to take a look at the odds for who will wind up as the 2012 Republican Presidential Nominee.

It does appear that Perry is slipping after last night's debate. Even in the time it took me to put this blog post together, he's lost a percentage point, going from 37.5% to 36.4%. While Mitt Romney has remained even so far today at 36.3%. These markets are of course fluid, but here's a snapshot of the current Intrade odds for each candidate at last night's debate, and how they've moved over the last week.

Ron Paul When we solicited your questions for Congressman Ron Paul shortly after the election, so many questions came in that we split Paul’s answers into two batches, the first of which was published last week. Here is the second. Like the first batch, they are well-considered and interesting throughout; they will surely make many […]

Do you love the smell of libertarianism in the morning? If so, today is a good day for you. Ron Paul Last week we solicited your questions for Congressman Ron Paul. There was such a big response (more than 400 comments) that we have split Paul’s answers into two batches, the first of which is […]

Congressman Ron Paul of Texas ran for president in the Republican primaries this year, raising more than $34 million and receiving more than 1.3 million votes. Ron Paul That obviously wasn’t enough to get anywhere near the general election, but Paul became a rogue hero of many in his party (and beyond), even mounting his […]

“Tonight John McCain will be in St. Paul, but St. Paul will be in Minneapolis.” Huh? That was a line spoken yesterday by Doug Wead at a political convention in Minnesota. The first “St. Paul” he mentioned was the city where the G.O.P. is holding its convention; the second one is Ron Paul, leader of […]

Just in time for tonight’s GOP debates, Michael Scherer at Salon offers a closer look at the growing GOP shake-up caused by presidential candidate Ron Paul, whom we’ve blogged about before. News from the International Journal of Hospitality Management: Diners will spend more money in your restaurant if it is scented with lavender. The bad […]

What Do You Have to Say About Ron Paul?

I am probably like the other 98% of Americans who know almost nothing about the libertarian Texas congressman Ron Paul, perhaps besides the fact that he’s running for President and that he seems to have a growing fringe following. So this e-mail, from a reader named Casey Hopkins, caught my eye: Why don’t you guys […]