Our recent podcast "The Cobra Effect" explored the unintended consequences of bounty programs. The episode was inspired by a visit to South Africa not long ago, where I was told about a rat problem in the Johannesburg township of Alexandra. For whatever reason, that story didn't make the episode. But now the Guardian comes to the rescue, reporting on Alex's efforts to fight off the rats by offering a cellphone for every 60 rats caught:

[C]ity officials have distributed cages and the mobile phone company 8ta has sponsored the volunteer ratcatchers.

Resident Joseph Mothapo says he has won two phones and plans to get one for each member of his family. "It's easy," he told South Africa's Mail & Guardian newspaper, wielding a large cage containing rats. "You put your leftover food inside and the rats climb in, getting caught as the trap door closes."

But there were signs that the P.R. stunt could backfire, as animals rights activists criticised the initiative on social networks.

Will this lead to rat farming or other shenanigans? The Guardian reports that owls have also been distributed to help hunt down the rats. 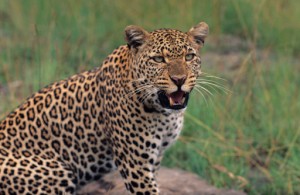 How Rolling Dice Helps Save Leopards

Researchers working in South Africa are using a rolled-dice trick to solicit honest answers from farmers suspected of illegally killing leopards and hyenas. The trick uses randomized response, a method developed in the 1960s to eliminate people's bias toward giving evasive answers. The basic idea is to prompt honest answers to sensitive questions (on topics such as sexual and even criminal behavior) by asking people to give an answer based on a random event. Researchers believe the resulting sense of confidentiality teases out truthful answers.

The study is called "Identifying Indicators of Illegal Behavior: Carnivore Killing in Human-Managed Landscapes," and has been published by Britain's Royal Society; here's the abstract:

How is Abstinence-Only Sex Education Like South Africa’s Driving Exam?

South Africa has had, for the last dozen years, what may be the world’s most difficult driver’s license exam. It’s an exercise in extremely defensive driving. Test examiners take off points for, among other things, failure to check all mirrors every seven seconds. An applicant can fail instantly if he lets his car roll backwards […]

What Do Houston Retirees and South African Schoolchildren Have in Common?

The answer is: they both have Cyril Wolf as a patron. Who? You may remember Wolf as the gentlemanly doctor in Houston who shared with me his research on how some drug-store chains charge 1000% more for generic prescriptions than Costco and Sam’s Club. (Yes, 1000% more.) The reason he was so distraught by this […]