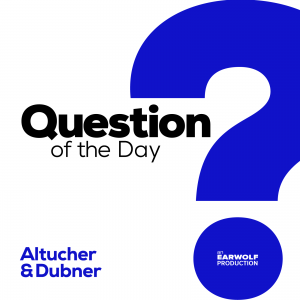 Introducing “Question of the Day,” a New Dubner Podcast

One of the best things about being a journalist is getting to ask questions. Stephen Dubner has been doing this for years, accumulating fascinating bits of knowledge, hidden insights, and wild stories. By now he knows at least a little bit about a lot of things.

The Boy With Two Belly Buttons

I first became a published writer at age 11, when a poem that I wrote for school (“The Possum”) appeared in Highlights magazine. While I have since written about thieves, terrorists, and even economists, I guess it is fitting that I have finally written a children’s book. It’s called The Boy With Two Belly Buttons, […]