When It Comes to Awards

A friend of mine received three prestigious academic awards in the same year.  I asked him, “Wouldn’t you have been happier getting them in separate years? After all, the marginal utility of an award probably is decreasing within a particular period of time. So wouldn’t getting these awards in separate years have increased your lifetime utility?”

He said that my observation was probably correct.  However, he was so surprised to receive even one of them, and the increase in his happiness was so great, that he just wasn’t able to think in this narrow economic way. I guess there are occasions (probably very few!) where even simple economics isn't 100 percent relevant. 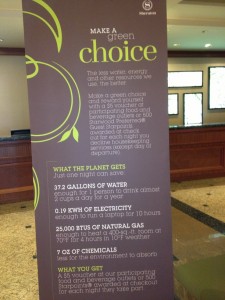 Staying at the Sheraton Boston, the hotel room has an option:  “Reward yourself with a $5 voucher at participating food … outlets for each night you decline housekeeping services.”   My consumer surplus actually exceeds the $5:  I would pay a little bit extra not to have the cleaning people in my room, since I wouldn’t have to worry about packing things up to hide them, nor about the cleaning people mistakenly throwing something away.  So I take the deal.   One friend here says this isn’t worth it to him—he likes having his room cleaned up each morning.  This illustrates how crucial individual tastes are to determining the surplus we gain from transactions—and the choices we make, or don’t.

I got an invitation to give a keynote address at a conference in southern France next June. A great conference, but I had to decline, since we’ve planned a week with the extended family on the New Jersey Shore (the only week we are all available). The man who invited me said,“… southern France would not have been a bad place to spend this holiday....”

Even though we love the Jersey Shore, he’s right—the relative utility from the French week would be higher; and if the relative price were one, we’d be off to France. However, the prices aren’t equal—it would cost over $1000 extra for each of 12 people to do the French week. Too bad—we’ll stick with the New Jersey week, a sensible and still very enjoyable economic decision in the face of income, price and time-constrained optimization.