The Economics of Happiness, Part 4: Are Rich People Happier than Poor People?

Continuing on the theme of the relationship between income and happiness (previous posts: 1, 2 , and 3), let me show you what Betsey Stevenson and I learned when comparing the happiness of rich and poor people.

Let’s begin with the most recent data from the 2006 General Social Survey, which asked: “Taken all together, how would you say things are these days?”

It sure seems like the rich are more likely to be “very happy” than the rest of us. Is this a big effect? In 2005, Robert Frank argued:

When we plot average happiness versus income for clusters of people in a given country at a given time, we see that rich people are in fact much happier than poor people.

It’s actually an astonishingly large difference. There’s no one single change you can imagine that would make your life improve on the happiness scale as much as to move from the bottom 5 percent on the income scale to the top 5 percent.

Let’s go ahead and draw the plot that Frank envisions, using all of the data from the 2006 survey: 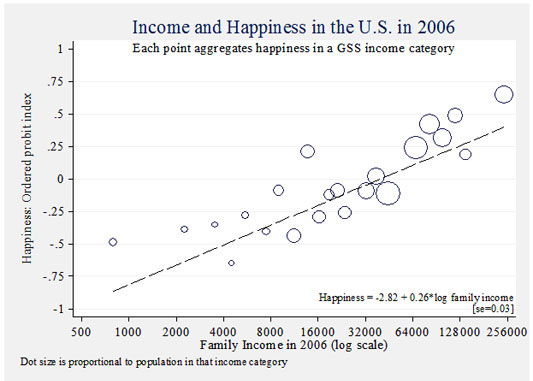 By comparing rich and poor people, we estimate a happiness-income gradient that has a slope that is similar to what we saw when we compared rich and poor countries.

OK, that’s the United States, what about other countries? We estimated the well-being-income gradient for over 100 countries in the Gallup World Poll. Rather than show you dozens of separate coefficients, we’ll let a picture tell the story (and let me admit, I love this graph). 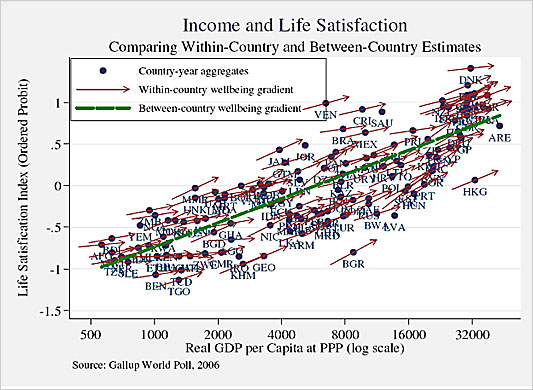 The arrows in this figure show the slope of the well-being-income gradient for each country, while the dots show the average level of happiness and G.D.P. for each country. The dashed line shows the best fit through these dots.

Why do we emphasize this finding?

Because it stands directly at odds with a key claim of Easterlin (see p.106 to 107):

… the happiness difference between rich and poor countries that one might expect on the basis of the within-country differences by economic status are not borne out by the international data.

Tomorrow I’ll describe what we learn from comparisons of countries through time.

Happiness doesn't come from "money"
happiness is a feeling that one gets when he's satisfied with whatever he has or whatever he's going through.The stage or time period when one thinks that i don't want anything better.
Poor people USUALLY tend to be more sensitive and understanding than the rich.
On the other hand,rich people are never satisfied with whatever they have,they keep striving for more and more and this is because of what they are never able to fulfill all their "wants",a good thing from an economics point of view but generally and socially,a very selfish decision.

So some people are suggesting that we crucify the rich because they are rich? What you don't realize is that many of these people ate cup of noodles everyday for 2 years to build their businesses. These people paid their employees salaries when they couldn't even afford to pay themselves just to build their businesses. These people sacrificed their life savings for a dream they believed in and *gasp* they succeeded. These people should be praised and they deserve EVERY benefit that they receive. If you have a self defeating attitude and think rich people are evil, you deserve to be poor because you don't know how much sacrifice, heart, courage and sweat it takes to become rich. It's always been true... poor people always play victim, thus it becomes a self fulfilling prophecy. They despise the rich, because they themselves are not willing to take the chance and live a very hard life for years at a time to realize their dreams. So of course... the rich are evil people. Like the British commandos say... he who dares, wins.

Of course wealthy people are happier, overall, there will things that make them frustrated and temporarily unhappy. But look at how they lobby to keep that wealth from the taxman, they live in a private utopia, in a much different world then the average middle class person.

They have access to opportunities and priviledges 90% of the population would never be able to attain because of social status discrimination. Once you're rich you're treated like royalty, lets face it. Americans worship rich people, even when they are getting fleeced, they vote against their interest constantly.

Excess wealth is not a virtue, Warren Buffet and many other concerned wealthy people are appalled that they pay less tax then the middle class and poor.

The truth is being allows one to have slaves and to distribute the risk and burden off onto the middle class and poor. There are many financial instruments that do just this.

It's important to note that this is a log-normal curve, not a linear curve. If the bottom axis were printed with a linear curve, you would see a line that climbed rapidly and then flattened out; meaning that it takes $9 million dollars to increase the happiness of a millionaire by the same amount (not to the same level) that $90 thousand would to someone with $10 thousand, or $9000 would to someone with $1000. If we want to maximise happiness, then this relationship is a strong argument for a heavily progressive income tax.

I think there is no relationship between money and happiness it's just about ways of thinking, every person think in different way than others do..
so that according to his or her vision in life
and I'm very sure that not the many which makes poor and rich people happy"! it's about how they are clever to face their problems

i guess it just goes to show how insecure rich people really are.

I totally am in sync with #14 Peter's opinion. Just my opinion of course, but Peter I adored how you expressed your opinion on this survey question. I do believe an optimistic attitude and perhaps having self-delusion does increase one's happiness as if you actually faced the "unhappiness" of the world ie. crimes, hunger, war and sin crisis in our world, how could anyone be state they are happy?

Listen, you cannot take the money with you when you die. We should remember, no one person can raise above the condition of his or her people. So if you or I think rich people are happy, well it is really a smoke screen because the overall condition of the world is in such bad shape today, it don't matter if you're rich or poor, everybody has or will feel the affects of a unstable society.

Rich people can't be happier than the people and vice versa. Happiness is a state of mind and body. You determine your happiness and not what you have. one can have the whole world and still not be happy because of one problem or the other money can't solve eg emotional trauma.one can also be poor and still be happy with the way thingaround he or her moves.

I think it would also depend on how hard you have to work to get to that income level.

From the best fit equation put on the graph (Happiness = -2.82 + 0.26 * (log of family income)) it appears to me that this means that at every level of income, a 10% raise increases your happiness by 2.6%, and a 100% raise increases your happiness by 26%. Can anyone verify that from the data shown?
I would be interested particularly in other possible correlations like percent or absolute amount of savings per year. I am curious if living high on the hog correlates with reported happiness.

Only poor people would search up "are rich people happier" and if your searching that up ou probrally arent to happy poor people :).

Happiness tends to be a brief emotional response to some particular event. Money wealth has little to do with it. How content is the person who laughs after the incident is past?

Contentment - satisfaction that one's needs (not wants and desires) are being adequately met and allows them to have a rich and fulfilling life.

Unhappiness is when someone else interrupts your state of contentment with a law or request.

What money wealth does, is allow a person to buy seclusion from interruption; that may or may not bring happiness or contentment. How much wealth is enough to be content?

I have the answer to neither question - can contentment or happiness be bought - since I'll never make a million dollars nor be totally poor in our money economy. I am content, however, and have plenty of good laughs. What a mess of convoluted thoughts!

On the other hand, if your goal is simply to live a happy life, and money acquisition is not a factor, then you will be happy regardless of how much money you have.