Indexed: The Shame Is on Both Sides of the Table

Jessica’s past posts can be found here, her own blog here, and her new book here. 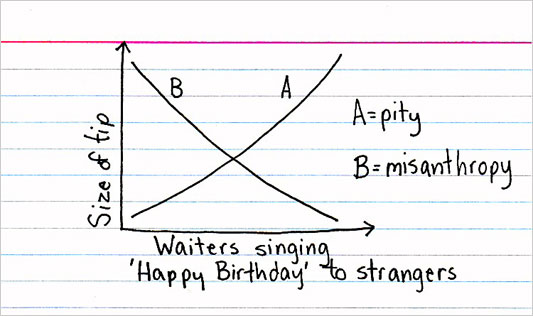 This is totally genius. Best one yet.
Easily.

I love to visit Jessica's site!

What drives me absolutely nuts, are the comments people make. They seem to be carrying over to the comments here. I guess that's what happens when someone a little more right-brained tries to communicate to the left-brained. They just don't get it. Quit thinking so hard and enjoy the art!

The pity line also makes sense to me, at least:
When many waiters sing to a complete stranger for the sake of a large tip, they are more pitiable.

That's what the post's heading means: 'shame is on both sides of the table'.

Also, IMHO, if the X-axis label was substituted with "running the credit card on a wireless hand-held", the diagram would still make sense.

Adam -
The curve isn't shifting - that term is reserved for when the entire line moves altogether in one direction (say, upwards or downwards).

It is not your PITY that increases, but waiters' pity. As you tip them more, they pity you more and more, and are thus inclined to sing happy birthday, out of pity.

What can we learn from this? Tip mean waiters more, and nicer waiters less!

B= the demand by the consumer(diner) for the lovely chorus ...The misanthropic diner is annoyed by the spectacle... and would tip less the more he is tortured.

A= the supply by the restaurant(wait staff) for enthusiastic renditions of our favorite ode... They work for tips so would do anything to increase the enjoyment of these pitiful..narcissistic... gluttons.

did they maybe mean the pity/misanthropy given out by the waiters towards you? THat's what I saw it meaning.

I'm glad to know I'm not the only one put off by this ritual. I follow the "pity" curve for sure; aren't waiters and waitresses demeaned enough? .

Worst are the chain restaurants (prohibited by copyright from using "Happy Birthday to You") who all have a similar song somehow reminiscent of Ren & Stimpy's "Happy, Happy, Joy, Joy!"

Plunk a candle in the brownie thingy and let us go home and sing in private...

I like these a lot. I'm also a misanthropist, so maybe that's why this one caught my eye.

But the misanthrope line never makes sense! It's always true, above, that as I become more misanthropic and the number of singing waiters stays the same, I am willing to tip more.

These might both be arguments in my supply of tips, and they may interact with the number of singing waiters, but this can't be how tips are determined (since you can only give one tip, this must be am attempt to graph an equilibrium). Is there an "excess misanthropy" function?

I think that 1) the axis should be "change in tip size" rather than just "tip", and 2) everything about the misanthrope curve should be negative (then shifts and magnitudes would work out).

It looks like at least one person would say Indexed has jumped the shark. I should know.

Clearly, some Indexed pieces are genius, while others look forced.

Love the concept, though. I'm wondering how long this concept will last. Milk it for all it's worth, Jessie.

I didn't say that the graph, as drawn, has any shifts. What is says is that there are two relationships between tips (S) and singing waiters (W). One, based on misanthropy, the other, based on pity. The misanthropy curve makes us less charitable as W rises. The Pity curve makes us more charitable. But unless you believe that everyone is equally misanthropic, and stays that way their entire life, you need to build in a method for shifting. Let me state my point more simply: the graphed relationships presumably exist. They do not determine the equilibrium S, as drawn.

Since all the graph does is relate the two labeled axes via two different emotional forces, it must be that misanthropy is constant and pity is constant within it. It DOESN'T say (as Raj implies) that misanthropy rises as singing rises. That's a different graph. And because of this, unless the definitions of pity and misanthropy here are very weird, it implies that increasing pity (all else equal) generates fewer tips. And that clearly isn't right.

As for whether the graphs represent waiter's misanthropy vs pity, well, the graph would then say that pity drives waiters to want to sing to you more as you tip more. Again, I don't understand how or why that would be. From your angle (which may be right, I don't know), the misanthropy curve makes sense, but the pity graph doesn't; you've just inverted my objection.

I'm embarrassed to say that I don't really get it.