Is Costa Rica Really the Happiest Nation on Earth?

Perhaps. But perhaps not. Nicholas Kristof‘s recent Times Op-Ed set out to explain why Costa Rica is “the happiest nation on earth.” This led my happiness coauthor Betsey Stevenson and me to explore further (which is why we are writing this post together). Kristof claims that:

There are several ways of measuring happiness in countries, all inexact, but this pearl of Central America does stunningly well by whatever system is used. For example, the World Database of Happiness, compiled by a Dutch sociologist on the basis of answers to surveys by Gallup and others, lists Costa Rica in the top spot out of 148 nations.
That’s because Costa Ricans, asked to rate their own happiness on a 10-point scale, average 8.5. Denmark is next at 8.3, the United States ranks 20th at 7.4, and Togo and Tanzania bring up the caboose at 2.6.

The ultimate source of these data is the Gallup World Poll, which we’ve analyzed in our previous research. It’s worth remembering that there are several measures of well-being in the Gallup data. The numbers Kristof cites come from responses to the question: “All things considered, how satisfied are you with your life as a whole these days? Use a 0 to 10 scale, where 0 is dissatisfied and 10 is satisfied.”
It’s probably worth being clear that what he’s measuring is life satisfaction, which may be very different from the point he’s making, which is about happiness. In fact, none of the major cross-national studies have ever measured the happiness of Costa Ricans. But they have measured some aspects of their subjective well-being.
More to the point, the well-being question that the Gallup folks tend to emphasize comes from the Cantril Self-Anchoring Striving Scale, which asks: “Please imagine a ladder with steps numbered from 0 at the bottom to 10 at the top. Suppose we say that the top of the ladder represents the best possible life for you, and the bottom of the ladder represents the worst possible life for you. On which step of the ladder would you say you personally feel you stand at this time, assuming that the higher the step the better you feel about your life, and the lower the step the worse you feel about it? Which step comes closest to the way you feel?”
On this measure, there’s nothing particularly notable about Costa Rica. She comes in equal 19th in the well-being tables — equal with Panama and Iceland, and just above Mexico.
As the chart below shows, typically these two measures are highly correlated. What is particularly striking is that Latin American countries (shown in red) tend to do a lot better on the question that Kristof emphasizes, rather than on the question the Gallup folks emphasize. 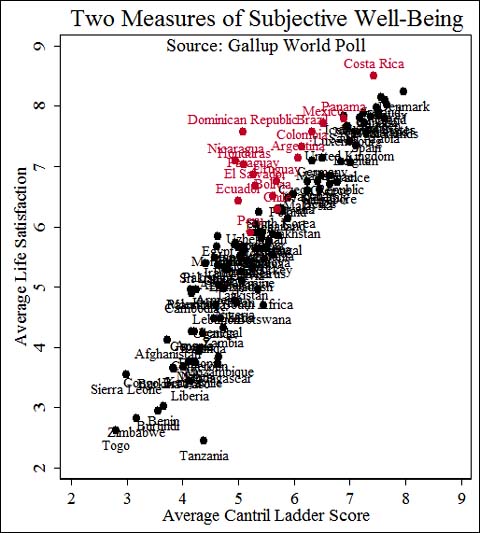 We can’t explain these differences, and we don’t even have a strong theory as to which is the better measure. Before we can declare Costa Rica the winner in the happiness stakes, we need further evidence.
One way to think about whether this is a robust finding is to look to other measures. Kristof tries this, reporting on two others:

Scholars also calculate happiness by determining “happy life years.” This figure results from merging average self-reported happiness, as above, with life expectancy. Using this system, Costa Rica again easily tops the list.
A third approach is the “happy planet index,” devised by the New Economics Foundation, a liberal think tank. This combines happiness and longevity but adjusts for environmental impact — such as the carbon that countries spew.
Here again, Costa Rica wins the day, for achieving contentment and longevity in an environmentally sustainable way.

Unfortunately these are not actually independent alternatives; they are simply the same life satisfaction number, but with extra adjustments made. Had they made these adjustments to the Cantril Ladder score instead, the conclusions would be far less favorable for Costa Rica than the numbers Kristof cites.
To know that a finding is robust, we would like to see similar results in another survey. So we dug a bit further to see what we could learn about Costa Rica. There are a few other major cross-national data sets measuring happiness, but unfortunately Costa Rica never features in the World Values Survey, the International Social Survey Programme, the Pew Global Attitudes Project, or our own database of historical happiness studies. At this point, it’s tempting to conclude that the most distinctive thing about happiness in Costa Rica is simply how few surveys have actually measured the happiness of Costa Ricans.
That said, there’s one useful source: The LatinBarometer measures life satisfaction in 18 Latin American countries. Typically, Costa Rica ranks in the top handful of Latin American countries. In 2006 — the latest year for which data are freely available — Costa Rica was the 4th most satisfied out of these 18 nations, behind Venezuela, the Dominican Republic, and Panama. In earlier years, it has been a bit higher — and it’s typically near the top — among Latin American nations. This is consistent with Gallup’s measurements using the Cantril Scale, which puts Costa Rica (along with Panama and Venezuela) atop the Latin American well-being tables.
While Costa Rica ranks near the top in the LatinBarometer, Latin American countries rarely rank in the top handful in the big international studies — except on the life-satisfaction question. Latin America is remarkably happy given its poverty, but it is rarely found to be as happy as the rich OECD countries (and particularly the Nordic nations) which are always near the top of the table, no matter what the specifics of the question asked.
Kristof may be right that there is something useful to learn from the relative success of Costa Rica. But let’s not lose sight of the fact that economic development is overwhelmingly the strongest explanator of which countries top the happiness tables.
(This post was written jointly with Betsey Stevenson.)