Contest Answer: What Was That Yellow Object?

Last week, we asked you to identify the object in this picture: 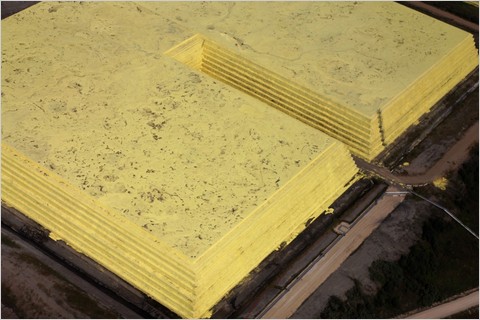 Among the answers: “a computer chip under a microscope”; “a package of Kraft cheese slices carefully sculpted”; and, courtesy of a reader named Schantz, “That’s the temple I see myself standing on in my dream, only in the dream, I’m wearing sort of sun-god robes with a thousand naked women screaming and throwing little pickles at me.”
But no. The photo, as many of you did properly identify, was an aerial view of a stair-stepped stockpile of sulfur at an Athabasca oil sands mining facility. It was taken by Nathan Myhrvold and described in SuperFreakonomics as a place that Myhrvold thought might be an appropriate base station for his Stratoshield operation:

One of the most plentiful waste components is sulfur, which commands such a low price that oil companies simply stockpile it. “There were big yellow mountains of it, like a hundred meters high by a thousand meters wide!” says Myhrvold. “And they stair-step them, like a Mexican pyramid. So you could put one little pumping facility up there, and with one corner of one of those sulfur mountains, you could solve the whole global warming problem for the Northern Hemisphere.”

Here’s a wider view to give you some context: 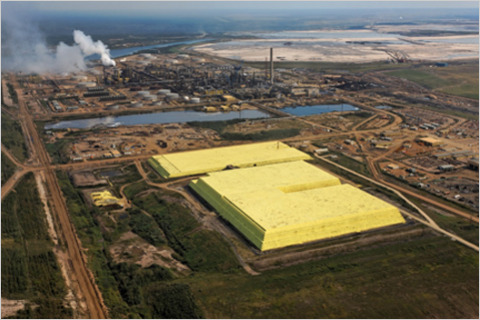 The first person to answer correctly was Robert McCarrick, the fourth commenter, just 13 minutes into the contest. Congratulations. Robert will get a piece of Freakonomics schwag for his work.