We are pleased to announce the publication of a new book: SuperFreakonomics: The Illustrated Edition. It’s a large-format book built around the original text of SuperFreakonomics, with hundreds of new visual elements and quite a bit of new text as well.
In the coming weeks, we’ll publish plenty of excerpts. For instance, here’s one illustrating some of the data that led Ignatz Semmelweis to conclude that doctors were infecting pregnant women and their babies by failing to sterilize their hands after performing autopsies, which led to thousands of deaths: 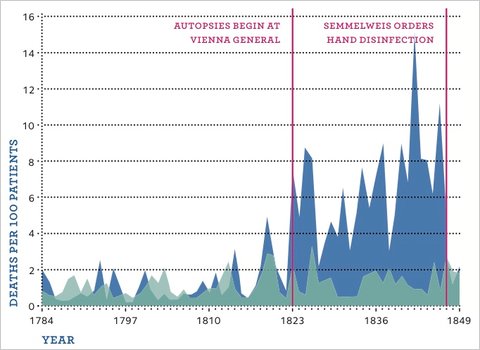 To confirm his suspicion that autopsies were somehow causing the high death rate in Vienna General’s maternity ward, Ignatz Semmelweis compared the Vienna statistics with those of a maternity hospital in Dublin, where doctors did not perform autopsies. The results were striking.

Or this one, which accompanies a passage dealing with the high rate of condom failure in India:

How do Indian men measure up? While it isn’t easy to conduct medical research on penis size, a few international studies do exist. The penis-enlargement company Andromedical compiled the available data and arrived at a ranking that shows average penis size in the countries surveyed. (Yes, several of your favorite countries will be missing.) India indeed ranks toward the low end. For those of you surprised to see France atop the list, it should be noted that the French data were compiled by French scholars.

Reprinted below is the book’s foreword, called “Why An Illustrated Edition?” This book was an absolute blast (and a struggle too) to put together, and we are very proud of it. As you’ll read below, the project was inspired by readers who wanted to see more of the stories behind the stories we write. So thanks to all of you for the nudge, and here’s hoping you enjoy it.

One of us is a numbers guy and the other is a word guy, but we both like pictures too. That’s why we made this illustrated edition of SuperFreakonomics: sometimes numbers and words aren’t enough.
By “pictures,” we mean a lot of different things – photographs, illustrations, scientific or technical drawings, even panels of data. The idea was simply to add another dimension to the two-dimensional words and numbers we’d already put down on paper. To show, for instance, an actual tracking sheet used to gather data on street prostitution in Chicago (see page 59). To diagram how easy it was to turn a bunch of altruists into a gang of thieves (page 125). To see what the “garden-hose-to-the-sky” scheme to fight global warming might look like (page 210). Because the pages in this edition are larger than those in the original, we also had room to add several stories that hadn’t fit, as well an original poem from a climate scientist (pages 228-229) and, perhaps most improbably, an epistolary duel between that same scientist and one of the giants of twentieth century literature (pages 218-219).
We are greatly indebted to all the people who contributed their photographs, recollections, and sterling ideas, from Allie the high-end call girl (pages 52-58), to the medical futurist Craig Feied (pages 71-78), to the gang of brilliant inventors at Intellectual Ventures (pages 192-221), and to many others.
The main text of the book remains unchanged except for some minor corrections. So if you already own the original edition and want this one as well, you might like to ask someone else to purchase it for you.
This edition was inspired by several readers who wrote to say they’d like to see more of the data behind the stories we tell. That inspiration was amplified by our admiration for Edward Tufte, who has extravagantly expanded the universe for data-centric storytelling. As we got under way, we thought: This is great fun; why isn’t every book an illustrated book? Then we found out why: because it’s a massive amount of work!
Fortunately, we had a corps of amazing comrades to help execute the task. Ryan Hagen was a tireless researcher and writer who also kept track of every logistical detail; you can find a picture of him in the following pages if you look hard enough (hint: he is not a terrorist). And the design firm Number 17 was creative and clever beyond belief. Super-size thanks to Emily Oberman, Bonnie Siegler, Rachel Matts, Naz Sahin, and Jamie Bartolacci. The good ideas and hard work of all these folks, and many more, are evident on every page.
As with childbirth (or so we are told), the pain of creation is quickly forgotten once the fruit of that labor can be held in one’s hands. With this edition now complete, we’re casting about for other unlikely books that could benefit from an illustrated makeover. Your suggestions are welcome. Next year’s federal budget might be interesting . . .