I’ve?written here before about my?research with?Betsey Stevenson showing that?economic development is associated with rising life satisfaction.?Some people find this result surprising, but?it’s the cleanest interpretation of the available data.? Yet over the past few days, I’ve received calls from several journalists asking whether Richard?Easterlin had somehow debunked these findings.? He tried.? But he?failed.
Rather than challenge our careful statistical tests, he’s simply offered?a new mishmash of?statistics?that appear to make things murkier.
For those of you?new?to the debate, the?story begins with?a series of papers that Richard Easterlin wrote between 1973 and 2005, claiming that economic growth is unrelated to life satisfaction.? In fact, these papers?simply?show?he?failed to definitively establish?such a relationship.? In?our 2008 Brookings Paper, Betsey and I?systematically examined all of the available happiness data, finding?that the relationship was there all along:?rising?GDP?yields rising life satisfaction.? More?recent data reinforces our findings. Subsequently, Easterlin?responded in?a pair of papers circulated in early 2009.??That’s the research?journalists are now asking me about.? But?in?a paper released?several weeks?ago,?Betsey,?Dan Sacks and?I assessed?Easterlin’s?latest claims, and found little evidence for them.
Let’s examine Easterlin’s three main claims.
1. GDP and life satisfaction rise together in the short-run, but not the long-run. False.? Here’s an illustrative graph.? We take the main international dataset – the World Values Survey – and in order to focus only on the long-run, compare the change in life satisfaction for each country from the first time it was surveyed until the last, the corresponding growth in GDP per capita.? Typically, this is a difference taken over 18 years (although it ranges from 8 to 26 years). The graph shows that long-run rises in GDP are positively associated with growth in life satisfaction. 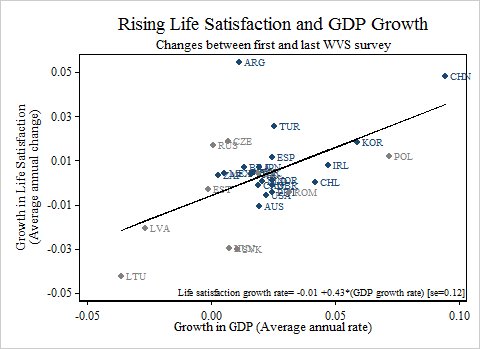 This graph includes the latest data, and Dan generated it just for this blog post.? In fact, Easterlin was responding to our earlier work, which showed each of the comparisons one could make between various waves of this survey: Wave 1 was taken in the early ’80s; Wave 2 in?the early ’90s; Wave 3 in the mid-late ’90s; Wave 4 mostly in the early 2000s.? And in each of these comparisons, you see a positive association – sometimes statistically significant, sometimes not. 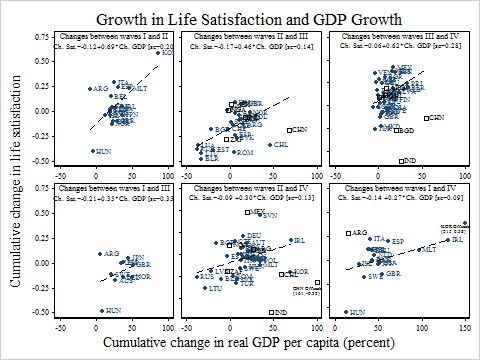 What should we conclude from this second graph?? Given the typically-significant positive slopes, you might conclude that rising GDP is associated with rising life satisfaction.? It’s also reasonable to say that these data are too noisy to be entirely convincing.? But the one thing you can’t conclude is that these data yield robust proof that long-run economic growth won’t yield rising life satisfaction.? Yet that’s what Easterlin claims.
2. The income-happiness link that we document is no longer apparent when one omits the transition economies. Also false.? One simple way to see this is to note that in the first graph the transition countries are shown in gray.? Even when you look only at the other countries, it’s hard to be convinced that economic growth and life satisfaction are unrelated.? To see the formal regressions showing this, read Table 3 of our response.? (Aside: Why eliminate these countries from the sample?)
Or we could just look to another data source which omits the transition economies.? For instance, the graph below shows the relationship between life satisfaction and GDP for the big nine European nations that were the members of the EU when the Eurobarometer survey started.?? Over the period 1973-2007, economic growth yielded higher satisfaction in?eight of these nine countries.? And while we’re puzzled by the ninth – the increasingly unhappy Belgians – we’re not going to drop them from the data! And if you think Belgium is puzzling, too, then we’ve done our job. 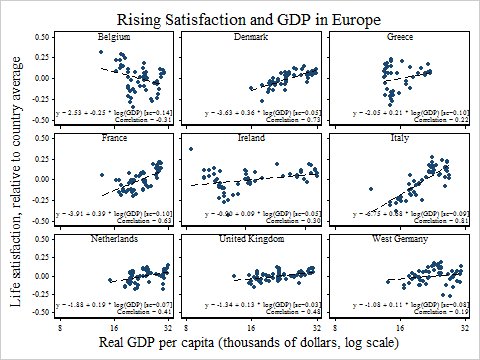 3. Surveys show that financial satisfaction in Latin American countries has declined as their economies have grown. Perhaps true.? But how are surveys of financial satisfaction relevant to a debate about life satisfaction?? And why focus on Latin America, rather than the whole world?? In fact, when you turn to the question we are actually debating – life satisfaction -these same surveys suggest that those Latin American countries which have had the strongest growth have seen the largest rise in life satisfaction.? This finding isn’t statistically significant, but that’s simply because there’s not a lot of data on life satisfaction in Latin America!? (Given how sparse these data are, we didn’t report them in our paper.)
What’s going on here?
Now it’s reasonable to ask how it is that others arrived at a different conclusion.? Easterlin’s Paradox is a non-finding.? His paradox simply describes the failure of some researchers (not us!) to isolate a clear relationship between GDP and life satisfaction.
But you should never confuse absence of evidence with evidence of absence.? Easterlin’s mistake is to conclude that when a correlation is statistically insignificant, it must be zero.? But if you put together a dataset with only a few countries in it – or in Easterlin’s analysis, take a dataset with lots of countries, but throw away a bunch of it, and discard inconvenient observations – then you’ll typically find statistically insignificant results.? This is even more problematic when you employ statistical techniques that don’t extract all of the information from your data.? Think about it this way: if you flip a coin three times, and it comes up heads all three times, you still don’t have much reason to think that the coin is biased. But it would be silly to say, “there’s no compelling evidence that the coin is biased, so it must be fair.” Yet that’s Easterlin’s logic.
There’s a deeper problem, too.? The results I’ve shown you are all based on analyzing data only from comparable surveys.? And when you do this, you find rising incomes associated with rising satisfaction.? Instead, Easterlin and co-authors lump together data from very different surveys, asking very different questions.? It’s not even clear how one should make comparisons between a survey (in the US) asking about happiness, a survey (in Japan) asking about “circumstances at home,” surveys of life satisfaction in Europe based on a four-point scale, and global surveys based on a ten-point scale.? Easterlin’s non-result appears only when comparing non-comparable data.
If you want to advocate against economic growth – and to argue that it won’t help even in the world’s poorest nations – then you should surely base such radical conclusions on findings rather than non-findings, and on the basis of robust evidence.
A final thought
Why not look at the levels of economic development and satisfaction?? The following graph does this, displaying amazing new data coming from the Gallup World Poll.? There’s no longer any doubt that people in richer countries report being more satisfied with their lives. 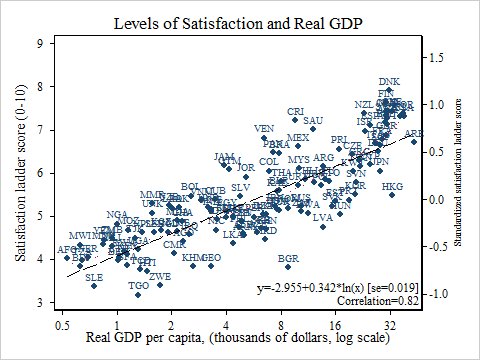 Is this relevant?? Easterlin argues it isn’t – that he’s only concerned with changes in GDP.? But the two are inextricably linked.? If rich countries are happier countries, this begs the question: How did they get that way?? We think it’s because as their economies developed, their people got more satisfied.? While we don’t have centuries’ worth of well-being data to test our conjecture, it’s hard to think of a compelling alternative.
This post was co-authored with Dan Sacks.
Update: The media reports about this paper are citing a paper published this week in PNAS. I actually linked to earlier work instead, because of a press embargo on that paper. But the PNAS paper just re-hashes results from the (non-embargoed) Easterlin papers I linked to and commented on, above.