We Hold These Truths to Be Universal

(A few weeks ago, I had the pleasure of attending a?conference honoring the accomplishments of Tom Ulen. One of the highlights of the conference was an unusual presentation by?Richard McAdams, who not only presented his own work but also told the audience about a cool review article by?Joseph Henrich, Steven J. Heine and Ara Norenzayan. ?Richard deserves a special thanks for highlighting a number of the piece’s neatest results.)
The behavioral revolution in economics and psychology has successfully identified and named close to three dozen biases (my?favorite behavioral folk song defines them in verse).? I had thought that these biases transcended issues of culture.? Indeed, both neoclassical and behavioral economists were united in a belief that cultural variables were of secondary importance when it came to the deep drivers of behavior.? But a series of experiments now has me thinking that the underlying heuristics are less universal.
The article,?“The Weirdest People in the World” (ungated working paper), has the startling thesis that social scientists in trying to investigate basic psychology may have erred by oversampling outlier populations.? The “Weirdest People” of the title are Western,?Educated, Industrialized, Rich, and Democratic.? (The cuteness of the title is not one of the article’s strengths.)? But the idea that “we” are the exotics?usefully jars one from complacency.
The heart of the review is a catalog of experiments where the results differ markedly across different societies.
Take, for example, the Müller-Lyer illusion, which I would have bet dollars to doughnuts would be a universal trick of the eye:

Turns out not only that different societies display different degrees of illusion bias, but the U.S. subjects (represented here by subjects in Evanston, Illinois) are outliers when researchers tested for the prevalence of the illusion across more than a dozen societies throughout the world.? The WEIRD subjects, as expected, require “segment a” to be on average 20 percent longer than “segment b” before they subjectively assess the two to be the same length.? But other cultures exhibit markedly less bias.? Indeed, the “San foragers of the Kalahari seem to be virtually unaffected by the illusion”: 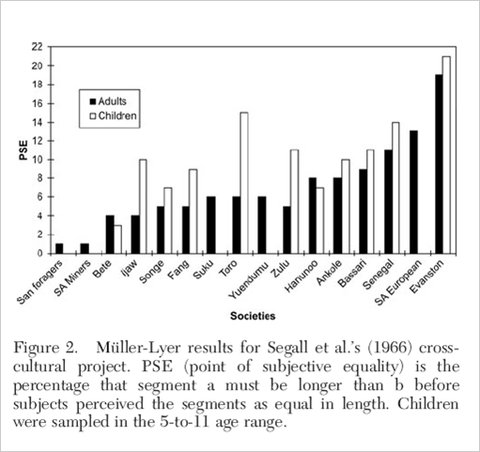 The non-representiveness of the United States can also be seen in experiments testing the propensity of subjects to be opportunistic.? For example, look at the results from the Dictator Game, which allows one player (the Dictactor) to decide unilaterally how a pot of money will be split with another player: 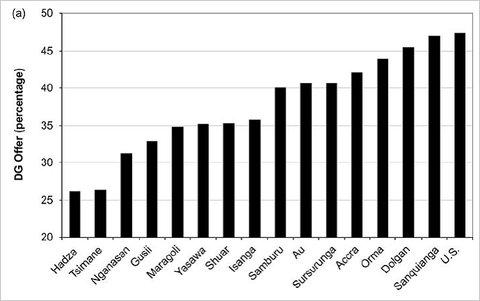 Dictators in the United States and in Canada (Sanquianga) offer nearly half of the prize to the other player.? But the “U.S. offers are nearly double that of?the Hadza, foragers from Tanzania, and the Tsimane, forager-horticulturalists from the Bolivian Amazon.”
The most bizarre results came from a two-stage game of cooperation and punishment. In the first stage, players could contribute to a public good by contributing money to a group project. “All contributions to the group project were multiplied by 1.6 and distributed equally among all partners. ” In stage 2, players could pay some of their private money to “to punish other players by taking money away from them.” What’s bizarre is who subjects from different societies choose to punish: 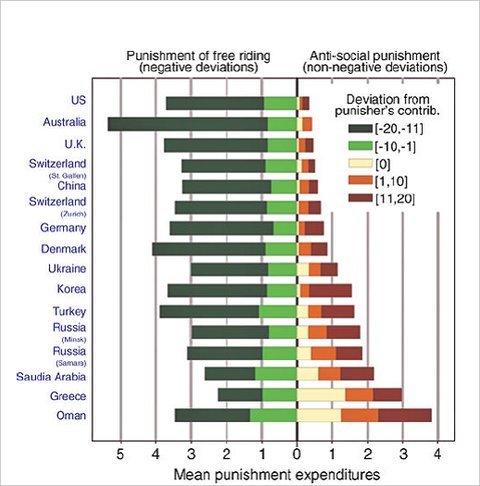 The green, left-hand side of the graph shows the propensity of subjects to punish players who failed to contribute to the group project.? The propensity of U.S. subjects to punish free-riders doesn’t seem weird at all.? But the U.S, Australia and the U.K. subjects were much less likely to punish players who HAD cooperated by contributing to the group project.? In other societies, “[m]any subjects?engaged in anti-social punishment; that is, they paid to reduce the earnings of “overly” cooperative individuals (those who contributed more than the punisher did).”? It might be that subjects in Oman reason: Who do you think you are, giving so much of your private money to promote a social cause?
Even the fundamental attribution error seems less fundamental when tested on non-Western cultures.? The fundamental attribution error posits inter alia that individuals tend to “ignore situational information in favor of dispositional information” when evaluating others (but overplay situational information when evaluating themselves).? So, for example, if I miss a free throw in an old gym, I’ll tend to blame it on a bent rim.? If you miss a free throw in the same gym, I’ll tend to blame it on your poor shooting prowess.? Turns out this bias is not as prevalent in other parts of the world:

The article is also nice in that it presents evidence that some traits/biases are more universal than others.? It is an excellent entre into much larger literature.? And?the response articles which go on for 40 pages are a rich and interesting feast in and of themselves.? Overall, the article has me rethinking the universality of bedrock principles of both neoclassical and behavioral economics.? It’s good to destabilize your cherished beliefs now and again.