Witches to Be Held Accountable for Bad Predictions; Why Only Them?

In Romania, life has gotten even harder for practicing witches, as spelled out in a recent A.P. article:

A month after Romanian authorities began taxing them for their trade, the country’s soothsayers and fortune tellers are cursing a new bill that threatens fines or even prison if their predictions don’t come true.

Fines or prison if a prediction fails to come true?

Witches argue they shouldn’t be blamed for the failure of their tools. “They can’t condemn witches, they should condemn the cards,” Queen Witch Bratara Buzea told The Associated Press by telephone. … Sometimes, she argued, people don’t provide their real identities, dates of birth or other personal details, which could skew a seer’s predictions. “What about when the client gives false details about themselves? We can’t be blamed for that.”

Seems like a sensible argument. But if I were Queen Witch (for a day), I might frame my argument a bit differently: As soon as the government starts to punish all fortune-tellers — including macroeconomists, financial analysts, government officials, sports pundits and the like — for their wayward predictions, I will gladly join the throng. Until then: no deal.
InTrade is an example of a prediction market that punishes bad predictions. Unfortunately, participation is voluntary. Wouldn’t it be nifty if anyone who made a prediction that other people use to make important decisions about their lives could be held accountable when their predictions turn out to be wrong? Should there maybe be a “prediction tax” for macroeconomists, financial analysts, sports pundits and the rest?
(Let’s do give credit, meanwhile, where credit is due: at the start of the most recent NFL season, Peter King of Sports Illustrated predicted that Green Bay would meet Pittsburgh in the Super Bowl. Sadly for me, his prediction of a Pittsburgh victory didn’t work out.)
And no, it is of course not a new thing to punish “witches” during tough times. Here’s a pair of related graphics from SuperFreakonomics Illustrated: 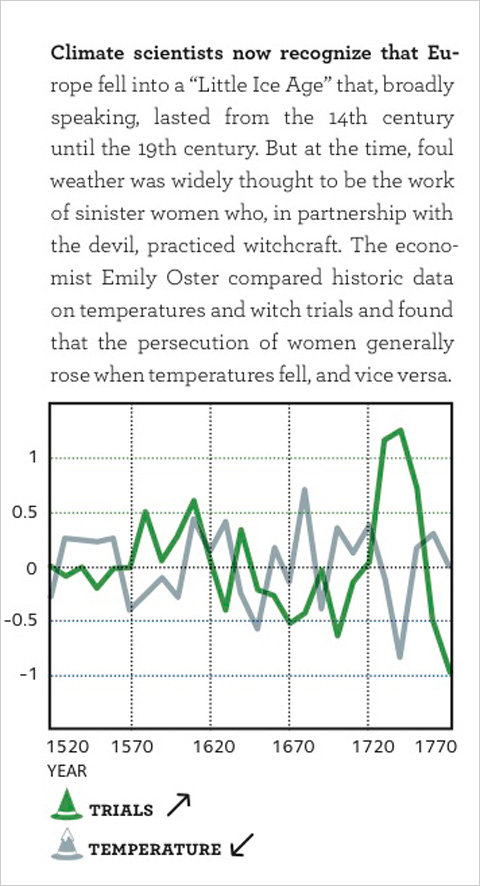 Below, a 16th-century account of a witch burning in Schiltach, Germany. The woman in question “was burned and thirty-six items were read out loud that she confessed to. Most shameful, horrible, and damaging things, how she caused mischief and harm to animals and people. For eighteen years she was working with the Devil, and her own mother herself had taught her”: 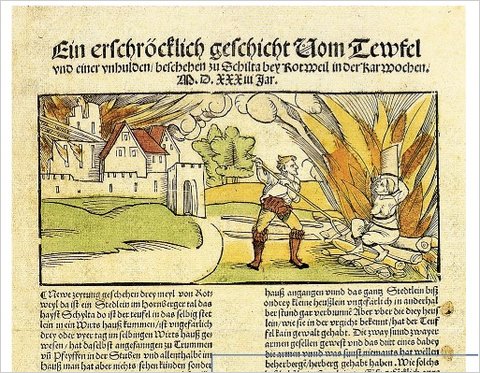