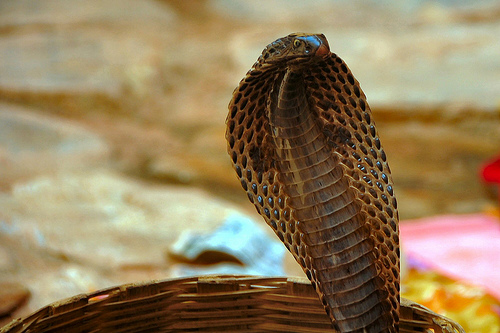 If you want to get rid of a nasty invasive pest, it might seem sensible to offer a bounty as a reward. But the problem is: nothing backfires quite like a bounty. In this episode of Freakonomics Radio, we look at bounties on snakes in Delhi, India; rats in Hanoi, Vietnam; and feral pigs in Fort Benning, Georgia. In each case, bounty seekers came up with creative ways to maximize their payoff – and pest populations grew. Stephen Dubner and Steve Levitt talk about how incentives don’t always work out the way we expect them to. Later in the hour, if you want to write a book about Winston Churchill, you are going to have to pay. The Churchill estate is intensely protective of Sir Winston’s copyright, so much so that if you write a book about him, you are likely to go into the red. Stephen Dubner talks about who owns words, and what it will cost you to write a book about Churchill.

Check out the podcasts from which this hour was drawn: “The Cobra Effect” and “Who Owns the Words That Come Out of Your Mouth?”

Love your podcasts but please skip the reruns. Better to just skip a week if you are on vacation. People start listening while, say, riding a bike or running, and have to stop and go to the next podcast if they do not want to hear it.

Twenty years ago the U.S. and the Russian Governments signed a twenty-year agreement for the U.S. to purchase 500 metric tonnes of Highly Enriched Uranium for recycling into mixed oxide fuel in commercial nuclear reactors. This prevented the HEU from falling into the hands of nongovernment actors. Naturally this created a cobra effect. The Russians continued to produce what we wanted to help them get rid of. I believe it was anticipated, and taken as the just part of doing business, necessary to keep the HEU out of the hands of bad actors.

I've seen a case where a landowner in my town cut down all the trees on the property prior to putting it up for sale. They are getting around a law designed to protect nesting birds. Trees cannot be cut down if there are nesting birds in them, so the landowner cuts them down in the fall so that he can sell the property and start construction in the spring when there might be nesting birds. The result is a loss of trees and nesting habitat. It is a counter-productive law.

For a great example, see C.W. Ceram's history of archaeology, *Gods Graves and Scholars* in which he describes the fate of the treasures of ancient Troy. The book can be read at
chrome://epubreader/content/reader.xul?id=9

Here is the relevant passage (hey, I'm an academic, so give me a citation if you use this!!)

Schliemann had once been forced to hide and guard his treasures, like a thief, from the grasp of officialdom. After many detours, important pieces from his Trojan collection finally landed in the Berlin prehistorical museum. There they lay for decades, surviving one great war. Even after the bombs of the second great war had fallen, parts of the collections remained unharmed and were taken to places of security. The “Golden Treasure of Priam” went first to the Prussian State Bank for safekeeping, then into the air raid shelter at the Berlin Zoo. Both these places were demolished. Most of the ceramics went to Schönebeck on the Elbe, to Petruschen Palace near Breslau, and to Lebus Palace in East Germany.

Of Schönebeck, nothing remains. Nothing has been heard from Petruschen—the area is now under Polish sovereignty. Lebus Castle was plundered at the war’s end, and later the East German government ordered the ruin pulled down. Subsequently word leaked to Berlin that there were still some ceramics to be rescued at Lebus. When a woman scholar managed to get permission to see Lebus she found the local authorities uncooperative. She then bought fifty pounds of candies and with these bribed the children to bring her any pottery they could find. Even though the children quickly learned to smash those pots that were yet unbroken, so as to increase their take in candies by bringing the shards separately, a few undamaged things did come to light—from the homes of local rustics who had been putting to their own uses the pots and plates and pitchers off which the ancient Trojans and the royal race of the Atrides had dined and drunk.