A recent podcast, "What You Don't Know About Online Dating," discussed how online dating has changed the process of finding a mate in traditionally "thin" markets.  Writing for FP, Bethany Allen explores the role of dating sites catering to young Chinese Muslims:

The men's photos show them clean-shaven, wearing T-shirts or sweaters, while the women are mostly without headscarves, some showing off their bare shoulders. In other words, they appear heavily Sinicized. That's because the site caters to Hui Muslims, many of whom are virtually indistinguishable in speech and dress from millions of ordinary young men and women in urban China.

That doesn't mean they aren't different: Many Hui still seek to marry within their ranks, despite the fact that they are widely dispersed across China, numbering only 10 million out of a population of 1.3 billion. But the Internet is coming to the rescue, as online Hui dating sites have arisen over the past few years to help some of China's urban Muslims find their matches. "The Internet links major Hui communities in every city," said Haiyun Ma, a professor at Frostburg State University in Maryland specializing in Muslims in China and a Hui Chinese himself. As a result, "it is easier for young Hui to find spouses" than it used to be.

Steven Perlberg of Business Insider quotes a private research note by ConvergEx's Nick Colas on the correlation between Olympic success and economic strength. "The Winter Olympics are a useful backdrop for case studies on the relationship between athletic performance and economic progress in emerging markets around the world," writes Colas. "We’ve analyzed the medal count by country since the inaugural Winter Games in 1924, and indeed the results show that athletes rarely make it to the podium until their respective countries experience economic progress and stability."  A few case studies from Colas's note:

3. The women of the "Opt-Out Revolution" are ready to lean in.

4. In South Korea, where 93 percent of students graduate from high school, "rock star" teachers earn millions.5. Is Boeing buying back old 747s to drive demand for new ones?

Another Explanation for Sex Selection in China?

In a podcast called "Misadventures in Baby-Making," we explored China's one-child policy as a cause of sex-selective abortion and, therefore, skewed male-female sex rations. A new working paper (abstract; PDF) by Douglas Almond, Hongbin Li, and Shuang Zhang points to another possible culprit: China's economic liberalization. From the abstract:

Following the death of Mao in 1976, abandonment of collective farming lifted millions from poverty and heralded sweeping pro-market policies. How did China’s excess in male births respond to rural land reform? In newly-available data from over 1,000 counties, a second child following a daughter was 5.5 percent more likely to be a boy after land reform, doubling the prevailing rate of sex selection. Mothers with higher levels of education were substantially more likely to select sons than were less educated mothers. The One Child Policy was implemented over the same time period and is frequently blamed for increased sex ratios during the early 1980s. Our results point to China’s watershed economic liberalization as a more likely culprit.

1. Movie tickets cost as much as $48; "Star Wars" creator George Lucas predicts that ticket prices are only going up. (HT: SM Fishman)

2. Name wars: Borghese Inc. fights the Borghese family for the right to market with the royal name.

4. An interactive data map (in French) of Paris Metro lines crossed with socioeconomic and political indicators.

Yesterday we gave an update on how attaching a lottery payout to bank accounts can help people save more money. A reader named Drew writes in about a different lottery nudge:

When I was studying abroad in China (2006) a friend told me that I should always insist on getting the receipt whenever I ate at a restaurant, because the receipts are scratch-off lottery tickets.

I didn't think very much of it at the time (as a visitor, I didn't think I'd ever collect any winnings), but one of the Freakonomics podcasts that talked about capturing unreported income (I think it was "The Tax Man Nudgeth") reminded me of their ingenious system to encourage customers to demand that restaurants report their income.

I wasn't sure if it was still going on, but this blog suggests that it still was at least a year ago. Here is an older post with a little bit more detail about the system. 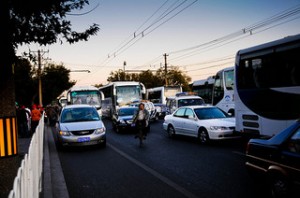 What Does That Have to Do With the Price of License Plates in China?

Bloomberg Businessweek reports that in Chinese cities, the cost of obtaining a license plate (about $6,900 back in 2011) can now exceed the cost of a vehicle:

Shanghai is one of four Chinese cities that limit car purchases by imposing quotas on registrations. The prices paid at Shanghai’s license auctions in recent months — 90,000 yuan ($14,530) — have exceeded the cost of many entry-level cars, the stronghold of Chinese brands such as Chery, Geely, and Great Wall. While residents with modest incomes may be able to afford an inexpensive car, the registration cost is often beyond their reach. “Whenever there’s a restriction of new car purchases through the quota system, there is always a big impact on lower-price cars like the ones we make,” says Lawrence Ang, executive director of Geely Automobile Holdings, whose Panda minicar sells for 37,800 yuan.

In our podcast "The Cobra Effect," we looked at license plate rationing in Bogota, where households purchase two cars in order to be able to drive every day of the week. In China, counterfeit military licenses plates, which allow drivers to avoid being pulled over by the police, are popular. This week, the Chinese government announced a crackdown banning military licenses for luxury vehicles.

The outgoing leader of China, Hu Jintao, has made fighting corruption one of the centerpieces of his party's agenda.  Perhaps because of that, my corruption antennae were working overtime while I was in China.

In Beijing, it seemed like our tour guide was perhaps a little corrupt.  For example, we attended an acrobatic show one night.  Included in the tour package were regular tickets to the show.  There were also two more expensive classes of tickets available, we were told, that would afford a better view.  The difference in price was not that great – maybe an extra $10 per person for the best tickets, and $5 more for intermediate tickets.  We gave the tour guide the extra $10 per person and told him to upgrade us to the most expensive tickets.  Our seats were indeed not bad, roughly the twentieth row of a theater that had perhaps 60 rows.  The back of chair was emblazoned with the letters “VIP.”  But here is the thing:  almost every seat in rows 16 to 20 was filled.  Rows 3 to 15 were completely empty (as were rows 40-60…it was not a big crowd on hand).  Rows 1 and 2 were completely full.  The only logical conclusion I could draw was that within each price range, the theater filled seats from front to back, and that our tour guide had taken the extra $10 per person, pocketed half of it, and bought us tickets in the intermediate price range.  Had the theater not been so empty, his scheme wouldn’t have been at all obvious – we would have thought it was just bad luck that we were in the back of the VIP section, but the empty rows gave him away. 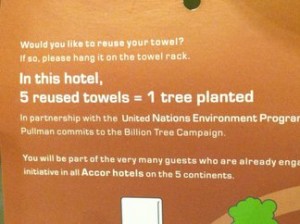 I’m always suspicious of companies who tout how environmentally friendly they are, when being green happens to coincide with cost savings for the firm.  The best example is the ubiquitous message you see in hotel rooms asking the guest, in the spirit of the environment, not to have the sheets and towels washed during your visit.  I have a hard time believing that if the situation were reversed – that the green answer was quite costly – the hotels would be such tree huggers.  (For the record, I don’t care at all whether my sheets and towels get washed, so I cooperate.)

At a hotel in China, I finally found a “green” message that I found compelling:

Official statistics would certainly suggest that crime in China is extremely low.  Murder rates in China are roughly one-fifth as high as in the United States.  According to the official crime statistics there, all crimes are rare.  China certainly feels safe. We walked the streets in rich areas and poor and not for a moment did I ever feel threatened.  Graffiti was completely absent.  The one instance where I thought I finally found some graffiti near a train station in the city of Shangrao, the spray painted message on a bridge turned out not to be graffiti, but rather a government warning that anyone caught defecating under the bridge would be severely punished.

Yet, there were all sorts of odd behaviors that made it seem like some crimes were a big problem.

First, there seemed to be an obsession with the risk of counterfeit money.  Our tour guides felt the need to teach us how to identify fake money.  Whenever I bought something with currency, the shopkeeper went through a variety of tricks to validate the legitimacy of the bills.