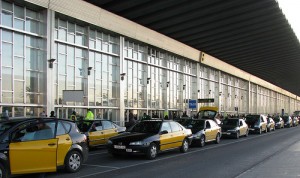 Why Does Airport Pickup Cost More?

We are arranging a car to take us from our flat to Heathrow Airport early Saturday morning, then return us on Monday evening.  The price going to the airport is ₤28, the price returning is ₤38.  Why the difference?

One possibility is cost-based price discrimination: the driver may have to wait at Heathrow, since the plane and retrieving our baggage may be delayed.  Another is that the prices are set to match the differential set by metered taxis to reflect waiting time for fares at Heathrow (although I would think that competition among car services would eliminate that differential).  I don’t see how this differential could arise from demand-based price discrimination; and neither of the other explanations seems very satisfying. 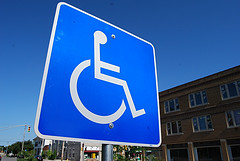 John List and Uri Gneezy have appeared on our blog many times. This guest post is part a series adapted from their new book The Why Axis: Hidden Motives and the Undiscovered Economics of Everyday Life. List appeared in our recent podcast "How to Raise Money Without Killing a Kitten." 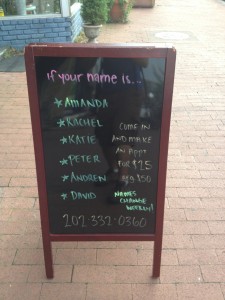 From a reader named Philip Mulder comes this photograph:

Philip says this is a hair-cutting joint in Washington, D.C. As you can see, it offers a 50% discount if your name is -- in this case -- Amanda, Rachel, Katie, Peter, Andrew, or David. I don't have my master database of black-white names handy (hey, it's summer), but I'm pretty sure that at least five out of those six skew pretty white. So, a couple of questions: 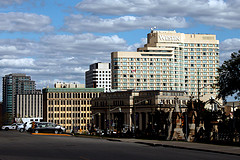 Canadian reader Lisa Sansom wrote to us about an interesting price promotion at Starwood hotels:

We're celebrating the year you were born. With this special offer for two or three night stays, you'll receive rates equal to your birth year! 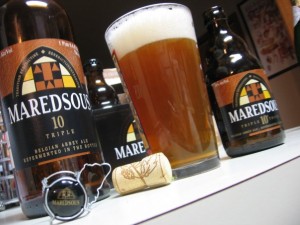 Pricing in the Land of Beers

Belgium prides itself on being “The Land of Beers.”  A Belgian student tells me that this pride leads to some unusual pricing policies among the less well-known breweries.  Apparently, many charge a higher price for their products when they are sold within the local area around the brewery, since people are proud of their local brand.  This is a clear example of demand-based price discrimination.  The average cost of selling locally is probably below that of selling elsewhere (lower transportation costs); but locals’ pride in the native tipple gives the brewers some monopoly power, which they are happy to exploit.  The brewers are made better off (higher profits) by the locals’ behavior; and the local people must be better off, otherwise they would choose different brews. 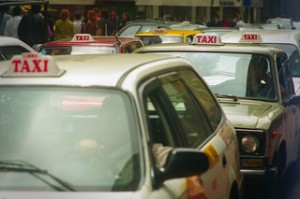 A study on the taxi market in Lima, Peru examines price differences between men and women. Taxi prices in Lima are set by bargaining, and the market of sellers is extremely competitive. The authors initially found, surprisingly, that "men face higher initial prices and rejection rates."

However, when the experiment was performed again with a strategic move, the discrimination disappeared:

Passengers in this study begin by rejecting a first taxi to send a signal of low valuation to a second (waiting) taxi which they then negotiate with. Despite passengers otherwise using an identical bargaining script, we find that negotiated outcomes at the second taxi are gender blind. The second taxi treats men and women the same. 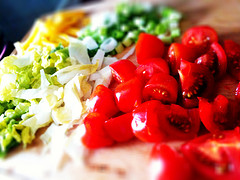 The Economics of the Vegetarian Option

Went to a one-star Michelin restaurant in Bonn last night.  One of the best meals I’ve ever eaten. Three of the four of us ordered the five-course prix fixe all-vegetarian menu.  As we left, I thanked the chef-owner -- who responded “Despite it being vegetarian!”

He seemed slightly upset about serving this menu. Was it because his revenue from it was only €63 compared to €91 for a five-course regular menu (which had one meat and one fish course)?  Maybe. But I don’t believe the vegetarian menu used less labor, nor was there a €28 difference in materials cost.

Got a haircut at the beauty parlor down the street in Bonn, Germany.  The young lady washed my hair first and dried it after very carefully — neither of which is done at home.  The whole thing cost only €10, much less than I pay at the beauty parlor that my wife patronizes in Austin.  On the price list, though, no price was as low as €10.  I asked why, and was told they give a special price to those who are (as we might say in the U.S.) follically challenged. I observed a hirsute fellow in the next chair, whose haircut lasted much longer than mine.  Clearly, the shop was engaging in cost-based price discrimination. 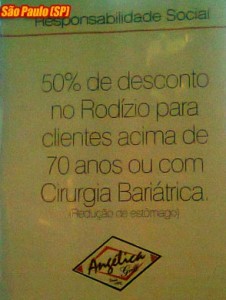 Adriano Dutra Teixeira, a Brazilian economist, sent us this photo from a restaurant. As he translates:

"Social Responsibility: 50% discount on meal for clients over 70 or bariatric surgery (stomach reduction)."

I thought it was hilarious! So I wrote a blog post with a microeconomic approach to the promotion, using price discrimination.

I had to chuckle, in part because we're finishing up a podcast about commitment devices, in which Levitt offers some bizarre alternatives to bariatric surgery (which we wrote about here), since it is such a drastic commitment. 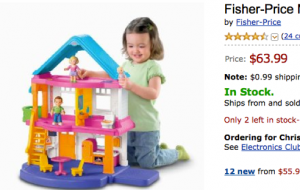 Why Does a Caucasian Dollhouse Cost Nearly 70% More Than an African-American Dollhouse?

Amazon reviewers have taken note, and aren't pleased. When my son Solomon (11 years old) wandered past my computer last night as I was looking this over, he didn't need any prompting: "That's so racist!" he said.