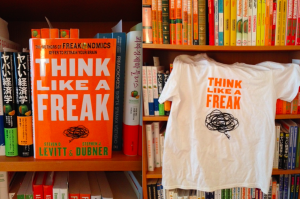 Book Club. How does this work? You send in your questions/comments/complaints about the book and we respond in our podcast.

The first installment ("How to Screen Job Applicants, Act Your Age, and Get Your Brain Off Autopilot") covered Chapters 1-3 of Think. Now it's time for you to send in questions for Chapters 4, 5, and 6 (see Table of Contents, below). If your question ends up in the podcast, we’ll send you a signed copy of Think Like a Freak or a limited edition Think Like a Freak t-shirt. So fire away! 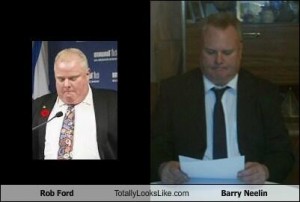 Why No Work for a Rob Ford Look-Alike?

I am constantly being asked if I am Rob Ford.  Some say we could be twins. I want to be able to offer corporations my Fordability to advertise their products using Mr. Ford's facial recognition. I have had no luck. Some say this is unusual in that he has selling appeal. I consider my freak ways of decision-making reliable, but I am up against a wall. Your thoughts would be appreciated. See attached pic.

I guess the first step for Barry would be to determine what kind of corporations are open to using "his Fordability to advertise their products." Any thoughts? 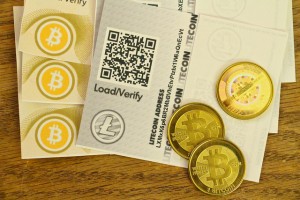 What Do You Want to Know About Bitcoin? And Do You Really Care?

We get a lot of e-mails with requests/suggestions for podcast and writing topics. These days, the most popular request by far is for  Bitcoin. I am still not sure we'll do it but I'm thinking about it. If so, what do you want to know? Please be specific. Also: do you really care? It strikes me that, at the moment, Bitcoin is one of those things that a small number of people care about hugely but that most people couldn't care less. (Freakonomics readers aren't, of course, "most people.") The rapid spikes and drops in value of course invites lots of news coverage but that is among the least-interesting aspects of a cryptocurrency, isn't it?

Question of the Day: What Do You Want to Know About Interesting People?

We are setting up a new series of interviews for Freakonomics Radio in which we'll identify interesting/accomplished/prominent people and ask them a series of Freakonomics-ish questions, ranging from their professional accomplishments to personal quirks. I am eager to hear your suggestions on both:

1) The people you'd want to hear from; and

2) What kind of questions you'd like to hear them asked.

No idea is too big/small, outlandish/traditional, etc.

Question of the Day: Why Don't Companies Advertise on Homeless People?

So why aren't there companies lining up to advertise on homeless people?

My guess is it's an image problem - not wanting to be associated with the "failure" of being homeless. But wouldn't that be compensated by the fact you could put forward the idea that you are a socially responsible and sympathetic company who cares for the less fortunate?

Well, the world already has given us Bumvertising and homeless people as wi-fi hotspots, and I wouldn't be surprised if homeless advertising has shown up on TV (hey Simpsons and Family Guy and South Park fans etc., let us know). But how would you answer Callum's question?  Does it fall into the category of:

a) Questions that are so obvious that they don't need an answer; or

b) Questions that should be asked more often, but aren't; or

c) Something else entirely. 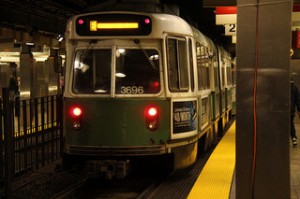 Obedience on the Job

On America's first subway, Boston's Green line, the middle doors stopped opening. When I asked the driver to open the doors, he said that he couldn't: now all boarding and deboarding at the above-ground stops is through the narrow front door by the fare box. Ah, the MBTA: making up for the 23 percent fare hikes on July 1 with improved service!

Me: "The new policy slows the ride for everyone. Now passengers cannot board and pay their fares until all the deboarding passengers have left."

Driver, shrugging: "It's the new policy. I just do what my boss tells me to do. I don't question."

Me: "We could use some questioning."

Driver: "Questioning isn't part of my job. I just wait for my pay day."

Question of the Day: What Are Your Best — and Worst — Retail Experiences?

We're working on a new Freakonomics Radio piece about what might best be called "retail etiquette." It was inspired in part by this blog post, about how the quantity and quality of employees affects a company's bottom line; and by this e-mail from a listener named Dawn Nordquist: 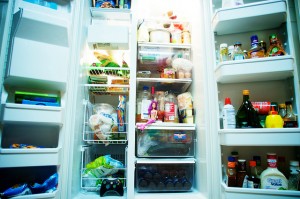 Question of the Day: What Does a Roommate's Bad Habit Say About the Economics of Jealousy?

I have long been interested in the effects -- psychological, economic, and otherwise -- of jealousy (and, relatedly, disgust and repugnance). Even using the word "jealousy" is probably loaded. (Maybe "resentment" is better? Doubtful.) In any case: somewhere between the 99% movement and the Mitt Romney-as-private-equity-bloodsucker meme lies a discussion that includes a lot of legitimate questions about fairness and a lot of less-legitimate emotional reaction that gets turned into political and intellectual fodder. 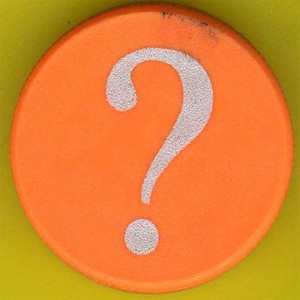 Bring Your Freakonomics Questions for a Radio FAQ

Once in a while, we do an FAQ podcast (that's FREAK-quently Asked Questions) whereby you send us questions via the comments section and we answer them in a radio program. We're gearing up to do another FAQ, likely to be released on Jan. 4, so fire away. Given the release date, you might consider asking about New Year's resolutions (and the commitment devices we sometimes employ); the dangers of drunk walking; maybe even the reproductive provenance of your holiday meal. Feel free to ask followup questions on radio stuff we've done in the past too, like the "Prius Effect" (conspicuous conservation), the decline of hitchhiking, and whether expensive wines actually taste better. Thanks in advance.

The Freakonomics Radio beast never sleeps: if you write in your questions in the comments section below, we will answer them -- in our podcast!