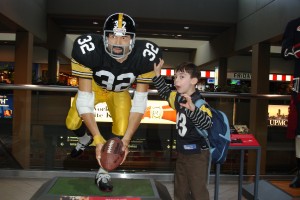 Everything You Need to Know About the Immaculate Reception

Tonight, at 8pm ET, the NFL Network is airing an hour-long documentary about the Immaculate Reception (video preview here), which took place 40 years ago this weekend.

If you are any kind of football fan, you know the Immaculate Reception as one of the unlikeliest and most dramatic moments in sports history. It is also loaded with myth and conspiracy theories, which makes it ripe for a documentary. The play remains such a big deal in Pittsburgh that the city's airport features, right alongside a statue of a young George Washington, a statue of a young Franco Harris, mid-reception. It is the kind of monument that fathers show their sons when they take their football pilgrimages to Pittsburgh:

A Second Life for Hero-Worship

I have a new book on sale today, although it’s not really a new book. HarperPerennial has just republished my second book, Confessions of a Hero- Worshiper, which originally came out in 2003. Here’s the Amazon link. It is currently ranked #3,984,523, so there’s nowhere to go but up. The book is a memoir of […]