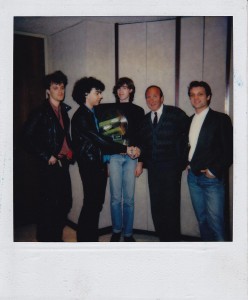 The Right Profile Lives Again (for About 15 Minutes)

A long time ago, I played in a rock band, called The Right Profile. It was a great deal of fun. We wound up getting a record deal with Arista. Here's a picture of us with Clive Davis, who was willing to take this picture pretending we'd already gotten a gold record (I'm the guy shaking his hand):

But I quit the band about a year later. We were in the middle of making our first record. I decided I didn't want to try to be a rock star after all, as much fun as it was. Writing suits me better.

I pretty much went cold turkey and have performed almost no music since then. But all these many years later, The Right Profile is set to ride again, if only for a few songs. We were asked to participate in a concert by the Vagabond Saints' Society at a centennial celebration for the city of Winston-Salem, N.C., on Fri., May 7, from 7-10 pm. 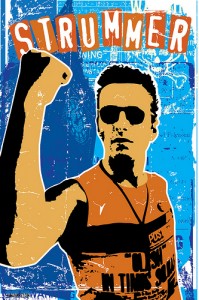 My old band was called The Right Profile. (I talked about quitting in this radio show.) It wasn't a great name probably but we stuck with it. I did love its provenance. It came from a song on The Clash's London Calling, which is still one of my favorite records ever. "The Right Profile" was about the strange, sad life of the actor Montgomery Clift, who after a terrible car crash was shot from the right side. It was hardly the best song on London Calling -- I wouldn't even put it in the top five -- but you come to love the names of people and things you loved, so I always loved The Right Profile.

So I was very jazzed to learn, via Variety, that a biopic of Clash leader Joe Strummer is in the works, to be directed by Julie Delpy, and it's got a great title:

Details from The Right Profile are being kept under wraps, but the idea is to focus on Strummer's life and his planned disappearance from the public spotlight in 1982. Pic is titled after the song "The Right Profile," which appeared on the Clash's seminal 1979 album "London Calling."

An iconic figure of the British punk movement, Strummer died in December 2002, just a month before he and the Clash were inducted into the Rock and Roll Hall of Fame.

I Had No Idea I Sounded Like Axl Rose

We recently posted a noisy song, “The Final Day,” by an unnamed artist, and ran a contest asking you to identify the performer. It sounded like it might be the latest in our series of recession songs, or maybe an outright apocalyptic number: Click Below to Listen The singer was me. Yeah, it was a […]

I did my undergraduate work — which consisted mainly of playing in a punky/country/rock band called The Right Profile — at Appalachian State University, which is located in the mountain town of Boone, N.C. (Levitt probably would have gone there too, if he had gotten in, but he had to settle for Harvard.) A.S.U. is […]