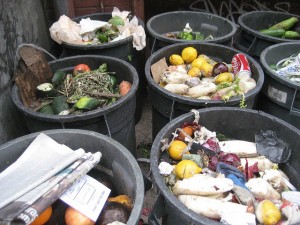 With So Much Food, Why Do So Many People Go Hungry?

Writing for Foreign Policy, John Norris explores this question: why does hunger still kill "more people every year than HIV/AIDS, malaria and tuberculosis combined" when one-third of the food produced for human consumption is wasted?

Instead, much more of the food waste in the developing world comes further upstream in the production process.

Crops are inefficiently farmed with outdated tools, and often harvested early because farmers are under economic and climactic duress. To get meat, fruits, vegetables and fish to market in the developing world often means navigating lousy roads, using warehouses without proper refrigeration, facing greater vulnerability to pests, and any number of other factors that drive up spoilage and losses. A gallon of milk doesn't last nearly as long when it is transported in a can that ends up sitting in the hot sun under a banana leaf.

It's a different picture in the developed world: 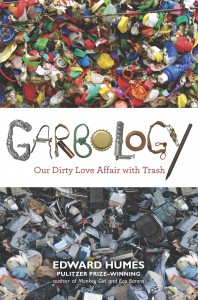 Bring Your Questions for Edward Humes, author of Garbology

We are quite fond of talking trash, literally: see our "Economics of Trash" podcast, and our "Weird Recycling" episode, and even the "Power of Poop."

The journalist Edward Humes is also fascinated with trash. His new book Garbology: Our Dirty Love Affair with Trash

is about the 102 tons of garbage the average American produces in a lifetime. Humes writes about what's in our trash, how different communities deal with it, and how we might could think about trash differently: "Waste is the one environmental and economic harm that ordinary working Americans have the power to change — and prosper in the process."

Humes has agreed to field your trash questions, so ask away in the comments section and, as always, we’ll post his answers in short order. 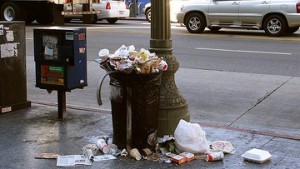 Too Much Trash? Get Rid of the Trashcans

New York City's Metropolitan Transportation Authority is trying a counterintuitive approach to cleaning up the subway by removing trash cans from some of its dirtiest stations. According to the New York Times, a subway stop in Queens and another in Greenwich Village have been entirely without trashcans for the last two weeks:

The idea is to reduce the load on the authority’s overtaxed garbage crew, which is struggling to complete its daily rounds of clearing out 40 tons of trash from the system.

But it also offers a novel experiment: will New Yorkers stop throwing things away in the subway if there is no place to put them?

Results have so far been mixed. While one bin-less station appeared relatively clean to a Times reporter, the experiment is obviously having some knock-on effects.

This week, why SpongeBob hurts kids' willpower, a restaurant in Saudi Arabia fines you for unfinished plates, robots inventing their own language, Indonesia's floating trash problem, jet packs are finally for real, and lie detectors that actually work.

The Hidden Side of Trash in Taipei

Our recent podcast about the economics of trash featured a story about an American grad student living in Taipei. He discovered that that city had an unusual trash-collection style: instead of putting your trash out at a curb or in a dumpster, you'd have to bring your trash out at a certain hour to deposit it directly in a municipal trash truck, which might be playing Beethoven to announce its arrival.

From Trash to Cash

What would motivate you to throw away less trash? Perhaps a healthy dose of environmental guilt would do the trick. Or would it take another kind of green — as in cold, hard cash — to force your hand? In the latest Freakonomics Radio Marketplace segment, host Kai Ryssdal talks with Stephen Dubner about how […]