A Great Free Course on the Economics of Cities

Ed Glaeser, the Harvard economist who has dazzled Freakonomics listeners and readers with his insights on cities (and a zillion other things) is offering a free, online HarvardX course called “Cities X: The Past, Present and Future of Urban Life.” Here’s the blurb: For the first time in human history, more than fifty percent of […]

A Distinguished Alumni Award for Dubner

I was recently humbled and thrilled to return to my undergraduate alma mater, Appalachian State University, to receive its Distinguished Alumni Award. Here's the introductory video the school made: 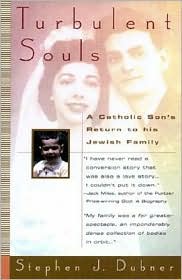 Who Should Play Stephen Dubner in Turbulent Souls Film?

Stephen Dubner's first book, Turbulent Souls, has been optioned by The Group Entertainment (Variety's report here), with writer Larry Gross (48 Hours, True Crime, We Don't Live Here Anymore) to adapt the memoir for the big screen. Not that we have a say in this, but just for fun we'd like to find out which actor Freakonomics readers think should play the Dubner in the film. 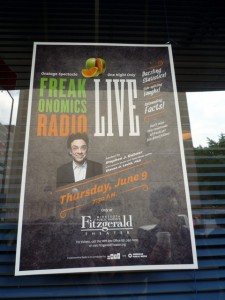 Last week, Freakonomics Radio took to the stage for a live event at the historic Fitzgerald Theater in St. Paul, Minn. Not only is St. Paul the home of Freakonomics Radio co-producer American Public Media, but Steve Levitt also grew up in the Twin Cities. So the live event had a good deal of "this is your life" stuff in it, including a Quiz Bowl competition between Team Levitt (Steve, his sister Linda Jines, and their father Michael) against the current team from St. Paul Academy, where both Steve and Linda starred on the Quiz Bowl team in their day.

We'll release a podcast next week drawn from the live event, including the Quiz Bowl competition. In the meantime, who do you think won?

More than any other economist, Nobel laureate Gary Becker has inspired and shaped the work of Steven Levitt. Here's your chance to submit a question for Stephen Dubner to ask Becker when they sit down for an upcoming video chat. Fire away in the comments section.

The Freakonomics Radio beast never sleeps: if you write in your questions in the comments section below, we will answer them -- in our podcast!

This Identity Theft I Can Live With

This week in reader e-mail brings a note from a 46-year-old man in Rockland County, N.Y., a director in a private company that outsources invoicing for telecommunications companies and newspapers. It turns out that he and I have something in common. Here is a tale of identity theft I am happy to report: Hello Stephen, […]

A Penny for Your Thoughts? What an Insult!

As of this writing, the CBS News program 60 Minutes is scheduled to run a segment on Sun., Feb. 10 (7 p.m. EST), on the fate of the penny: should it be abolished or not? I was interviewed on the subject, so if the piece isn’t preempted and if I don’t end up on the […]

A Super Bowl Preview from the Freako Family

The Patriots are playing the Giants in Sunday’s Super Bowl. I thought it would be fun to put together a short Super Bowl preview. I’ll go first (Justin Wolfers): Cheering for: The Patriots. My first four years in the U.S. were spent in Boston, and that’s where I learned to love the sport that you […]

We’ve been running lots of Q&As of late, with you, the readers, asking the questions. A fellow named Thomas Whitaker recently wrote us to suggest that we submit to a Q&A ourselves. This seemed like a sensible suggestion. We did a bunch of Q&As back when the book came out (see here and here and […]